Tomorrow (Thursday, 6p pacific, on ESPN, nation-wide) the Fighting Ducks will host the Cal Bears at Autzen Stadium. It is one of our biggest conference games and everyone is so excited about the match-up. We are taking the Magna Peregrinus to Eugene for the "party in the parking lot" prior to the game.

Between the first and second quarters, the University of Oregon is honoring athletes with Oregon ties who recently competed in the World Track & Field Championships in Korea. (A large contingent of US athletes live and train in Oregon year-round.) Their introduction will be a subtle reminder to the 60,000 fans in Autzen Stadium to get their tickets to the 2012 Olympic Trials, which be held in Eugene - next June. The Olympic Trials track meet will choose the US team for the London Olympics. My Driver is on the organizing committee for the Olympic Trials, helping to plan the 10-day event.

Since so many athletes are coming to Autzen Stadium to be recognized, DT thought it would be a good idea to host them prior to the game at our tailgate.

Gold medal winners, silver medal winners, bronze medal winners and athletes who competed for the US in Korea will show up and eat a burger at a tailgate hosted by DT, me, Woody, Kathy, Mary & Steve! For many of the athletes, this will be their very first tailgate.

We plan to spoil them. For what they do day-in/day-out for us, serving them a burger is the least we can do.

This afternoon I went to Costco and purchased 48 frozen organic beef patties, buns, tomatoes, veggie trays, chips and assorted brewskis. Then I came home, made a pasta salad for 24. (Mary is making a potato salad for 24.) 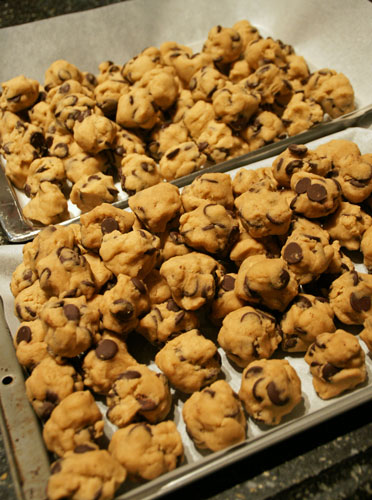 Rolled and ready to bake

Thank goodness I have two ovens. I made four recipes of my famous Big Soft Chewy Chocolate Chip Cookie recipe... except I made them about half the size as called for in the recipe. This produced nearly 12 dozen cookies. 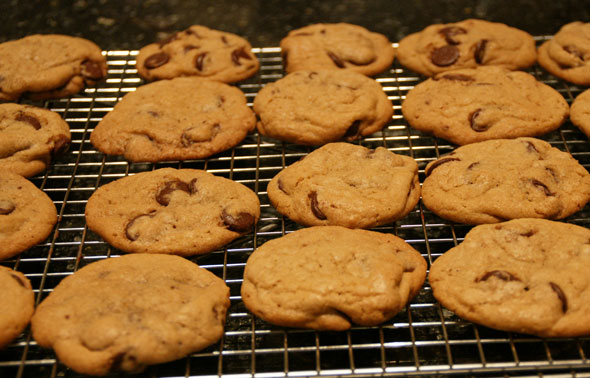