A Big Day in the Emerald City

Seattle, Washington: I am so tired as I type this column tonight. We were go-go-going all day, walking up and down the hilly Seattle streets and really enjoying the beautiful weather. It was 76° in Seattle today! (Of course it is supposed to be 66 and rainy tomorrow.) 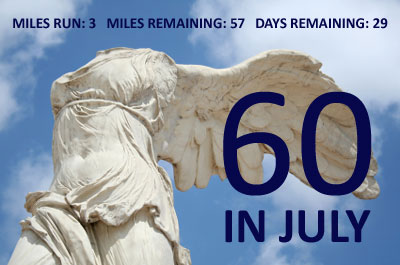 Better stick with the program, girl! Time marches on!

Another clear day - with a view to the Olympic mountains, and a cruise ship in the harbor 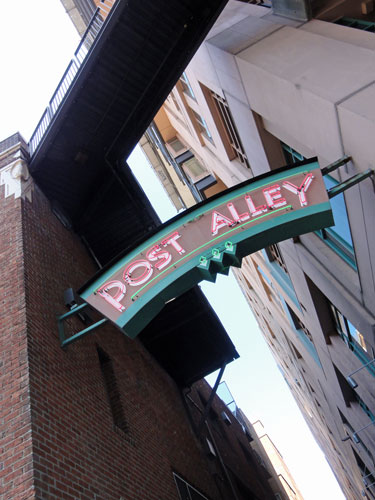 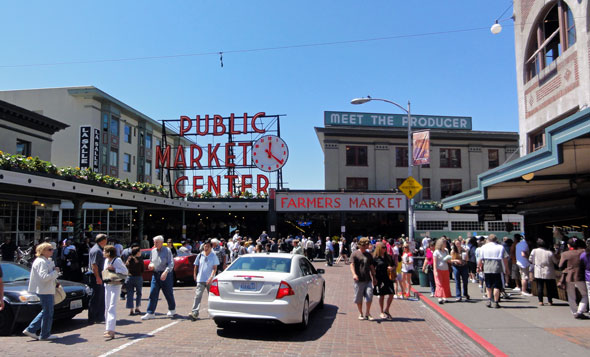 Pike Place Market. This, we soon realized, was the wrong thing to do on a sunny holiday weekend. 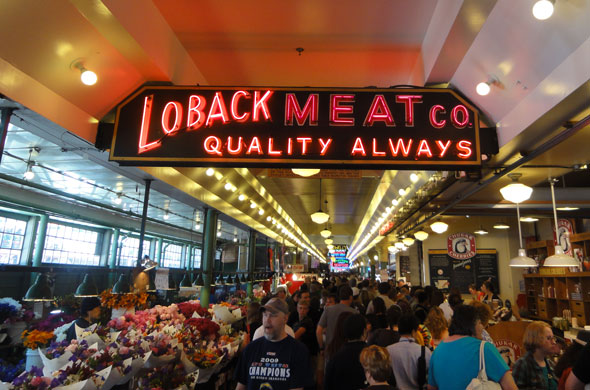 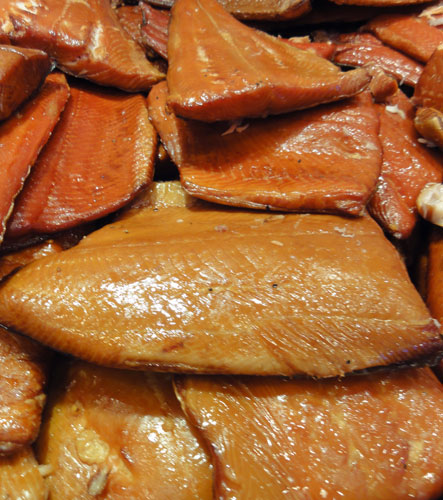 Seattle Art Museum to see their Beauty & Bounty: American Art in the Age of Exploration exhibit because we are so cultural and stuff like that. No, we really are not, but we really enjoy Albert Bierstadt, and several of his paintings are included in the exhibit, including this pretty painting of Yosemite: 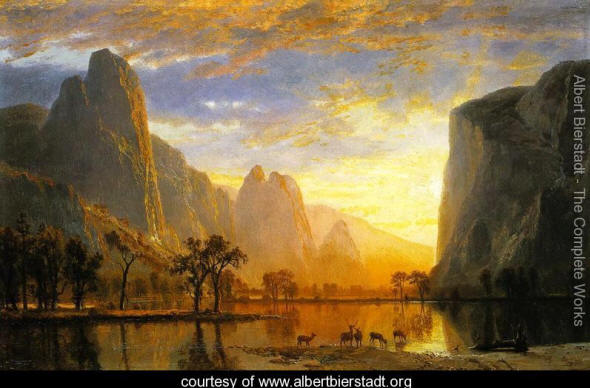 The Seattle Art Museum did not allow photography in the Beauty & Bounty exhibit, but photography was allowed elsewhere. Good thing too, because I would not want my readers living far from Seattle to miss this: 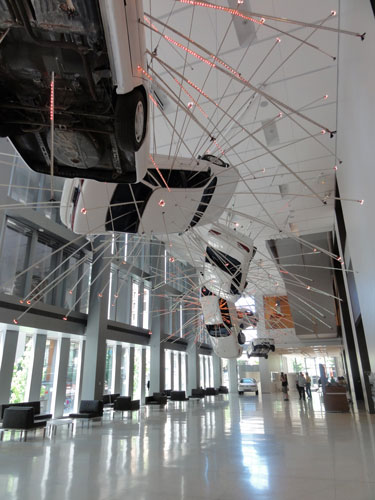 Just a few blocks from the Seattle Art Museum is Wild Ginger, an "Asian-inspired" restaurant featuring satay (meat grilled on sticks). At 4th & Union, Wild Ginger is a massive restaurant, with a music venue in the basement. I had to try their signature cocktail - a ginger-infused vodka martini. They infuse the vodka in-house - for three months! Dang, was it delicious. 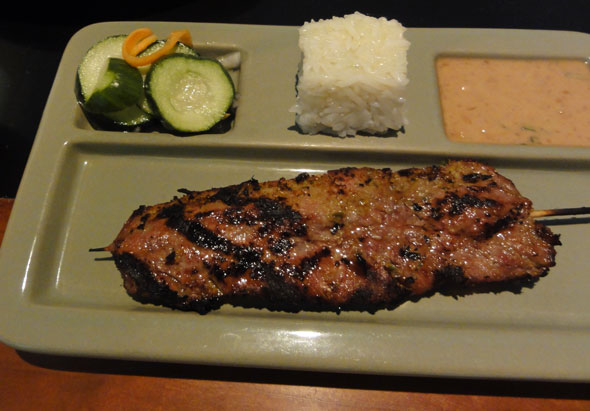 We tried VIETNAMESE HAWKER BEEF SATAY (flank steak marinated in a lemongrass yellow curry paste with ground peanut and lime leaf, accompanied by a rich peanut sauce with coriander and hoisin), YOUNG MOUNTAIN LAMB (lamb marinated in black pepper and Indonesian soy sauce, Served with an Indonesian peanut sauce), POTSTICKERS (traditional house made chicken potstickers served with a soy and black vinegar dipping sauce), BABY BOK CHOY (wok fried in a delicate garlic oil), and KUNG PAO CHICKEN (wok-fried white meat chicken with fresh garlic, peanuts, red and green bell peppers, onions, chilies and soy sauce). Everything was ridiculously delicious - especially the bok choy - except for the Kung Pao Chicken. It is our fault, it clearly states on the menu it included red and green bell peppers... but I assumed the "onion" would be green onion. It wasn't spicy at all. I mean no heat. If you want Kung Pao Chicken, go to Taiwan (or just use my recipe). I asked the waiter if he had something spicy and he claimed they had no spicy food on the menu. How the hell does a restaurant serving many Thai dishes have nothing spicy on the menu? Weird.

Back to the hotel to sleep off the martini for a rest before walking back to Safeco Field for the second Mariner v Padre series. Again, we walked back/forth to the game. Lots of exercise for this non-runner today! Before the game, we toured through the Mariner "history" section at the stadium. 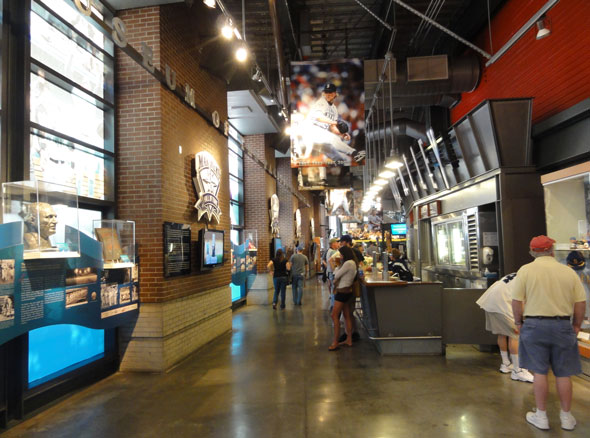 Many interesting displays and informational kiosks - and a bar. 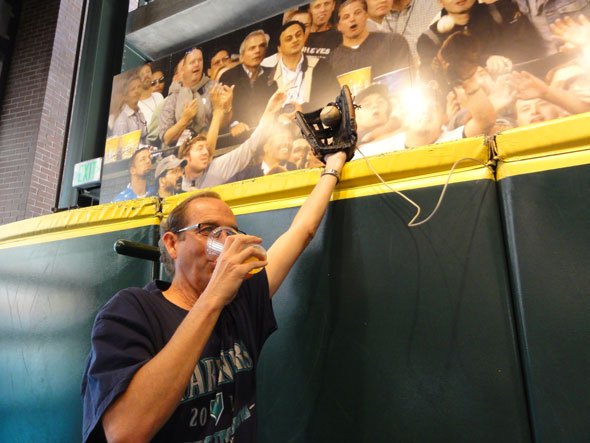 One of the kiosks lets you "catch a ball" just as it goes over the wall.

DT is such a great multi-tasker. 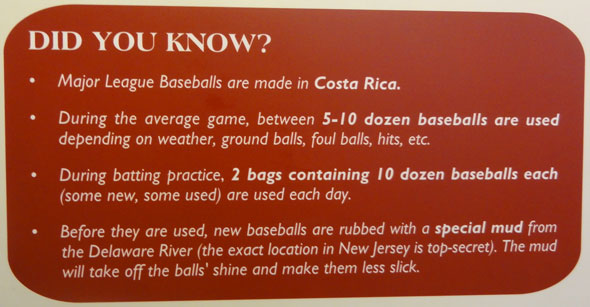 It was a beautiful evening for a baseball game. 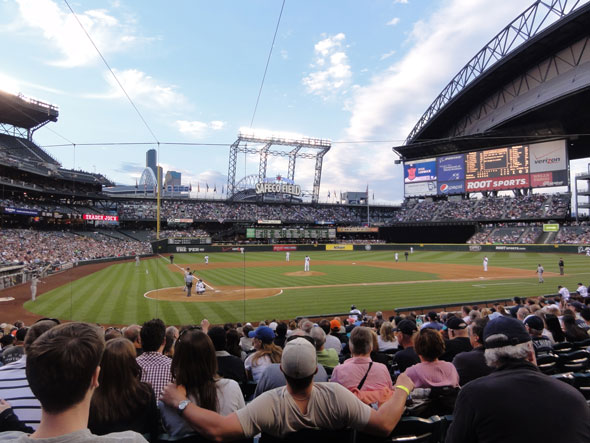 Again, we had great seats. I ordered the seats on the official Mariner website about three weeks ago and found great seats at face value. Face value is still $62. I can't imagine how a family can afford to attend a major league baseball game. 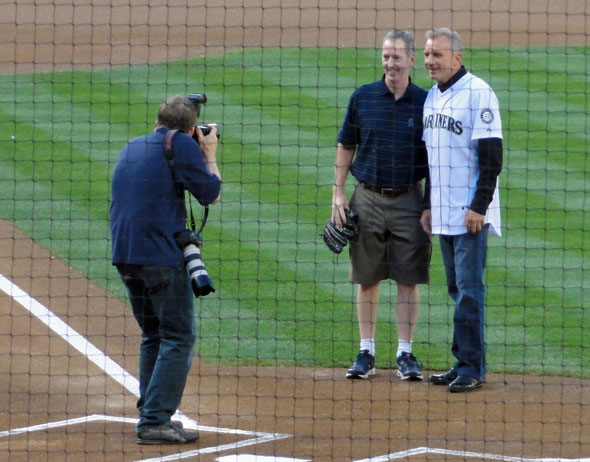 For some unknown reason, Joe Montana threw out the first pitch tonight. I would comment that Sir Montana had a much better arm than Sir Mix-A-Lot... but I assume you know that.

The food at Safeco Field is probably a bit different than most baseball fields. The stadium is just feet from the sea. You can smell the ocean from your seat. Most of the food choices are obvious: 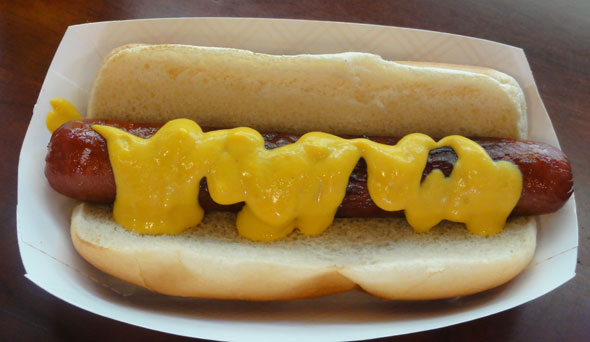 This was my dinner tonight. An all-beef dog smothered in mustard. Perfect. Every ball park in America sells a hot dog.

But this was my dinner last night at the game: 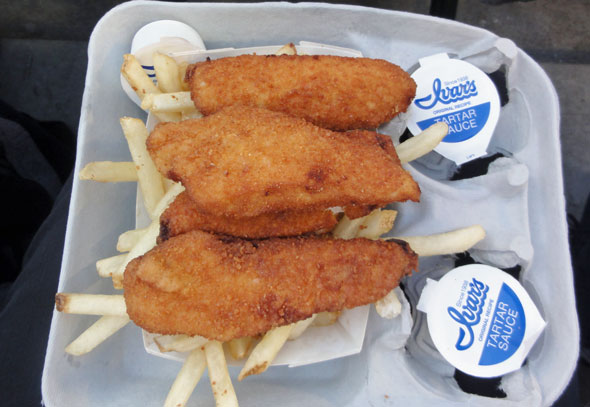 Because we west-coasters have such a large Asian population, sushi is as common as a burger. Safeco Field capitalizes on their #1 franchise player, Ichiro Suzuki, and the thousands of fans who fly-in on charters from Japan to watch the phenom play. At a Mariner's game, you can order all sorts of sushi - or an Ichiroll! 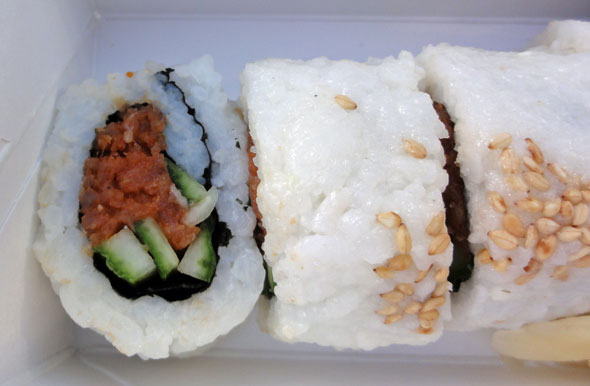 The Ichiroll sushi is actually hand-rolled before your eyes! Inside-out Spicy tuna and cucumber. Really delicious. DT and I polished-off the $9 (about one dollar per inch) roll in no time - with chopsticks, of course!

We had such a great time at the game - our seat-mates were a young couple from Louisiana. They had flown out to Portland to tour through the wine country (just near our house!) for a few days because they have fallen in love with Oregon Pinot Noir wine (who hasn't?) and just after they checked-in to their hotel, the boyfriend whipped out a huge diamond and proposed! So romantic. She was totally surprised - but she said yes. The next leg of their trip was up to Seattle to enjoy a few Mariner games. In further conversation we learned they are LSU grads and will be attending the Oregon v LSU game in Dallas, Texas on September 3rd. We may meet again? 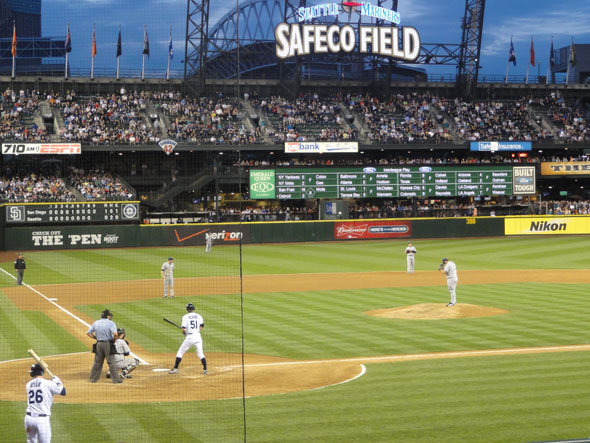 DT was very excited to be at the game tonight because Doug Fister was pitching. Why? Doug Fister also attended Merced High School! We enjoyed another great night at Safeco Field... except that the Mariners lost, 1-0... and the one run scored by the Padre's was via a mistake made by the umpires... which they later admitted to... say what? I don't understand this stuff.

A track meet is much easier to grasp.

Until my next update, I remain, your Ichi-loving correspondent.
« Seattle! Back from Seattle »