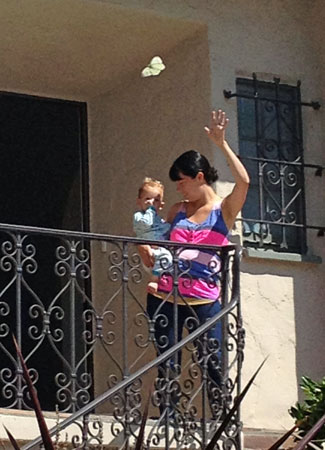 Why wave when I can suck my thumb?

I am sorry to report we have flown back to our home in Oregon. It is so difficult saying goodbye to Lisa & Lenny and nearly heart-breaking to say goodbye to that little baby. But I am exhausted. It isn't Leo that wiped-me-out, it is the Olympic schedule. We have been waking anywhere from 2 to 4:30 in the morning to watch track & field live from London on my iPad... and then staying up way too late to watch it replayed on NBC television. Well, sometimes. The track & field coverage is pretty lame, unless an American does well in an event - or unless Usain Bolt is in the race.

Today was particularly grueling, as decathlete Ashton Eaton raced the hurdles at 1a pacific, threw the discus at 2a and started pole vaulting at 5 o'clock... then we had a little break and nap until the javelin at 11:40a and finally the 1500m at 1:20. Between the javelin and the 1500, we watched Nick Symmonds in the 800m final. It was worth every drowsy moment. Mr. Eaton is the 2012 Olympic Gold Medalist! Mr. Symmonds finished 5th (with a personal best of nearly one second!) in a race where Kenya's David Rudisha broke his own world record (1:40.91) and all eight racers finished under 1:44. Unreal! It was one of the best races I have ever witnessed. I was shocked when NBC actually replayed the 800m race during their evening recap, instead of an in-depth Ryan Seacrest segment on bikini waxing with the swimmers.

Very warm weather greeted us in Portland, and I was worn-out, so decided to make one our favorite hot-weather go-to summer salads - BLT Salad. Tonight's version also included an avocado, thus the BLAT Salad. This recipe is flexible and super RV-friendly. Save time by using bagged lettuce and don't bother cutting the cherry or grape tomatoes. I use an uncured turkey bacon, but use what you will. Omit the bacon, or substitute a soy alternative, if you are vegetarian. I serve this salad as the complete meal. With the croutons, there isn't even need for bread. Mayo and bacon are usually quite salty, so none is added to the dressing.

Cook the bacon to desired crispness. Remove to a plate and cool. While the bacon is cooling, mix the mayonnaise, milk and black pepper in a small bowl and whisk well to combine the dressing. Place the lettuce, tomatoes, chopped avocado and croutons in a large salad bowl. Crumble/slice the cooled bacon and place in the salad bowl. Pour the mayonnaise mixture over all and toss well. Serves 4 as a meal, 6-8 as a side salad.

Until my next update, I remain, your track & field correspondent.
« Casita Update Twenty Years at Pumpkin Ridge »