No rain today! It was actually sunny and warm. I opened every door in the house. Thrilling! I am even feeling a little better today, but wish I had more energy.

There will be no new recipe from a cookbook today. Nope, just one of my own recipes - for potato gnocchi - fluffy little pillow-like dumplings. Tossed with butter, a red sauce or a little pesto, gnocchi are a tasty little addition to your usual Italian repertoire. Plus, they are fun to make. This really isn't a recipe, so to speak. Egg, salt and flour are added to warm riced/smished potatoes until a smooth dough is formed. The cook needs to go more by feel and intuition than following precise measurements. 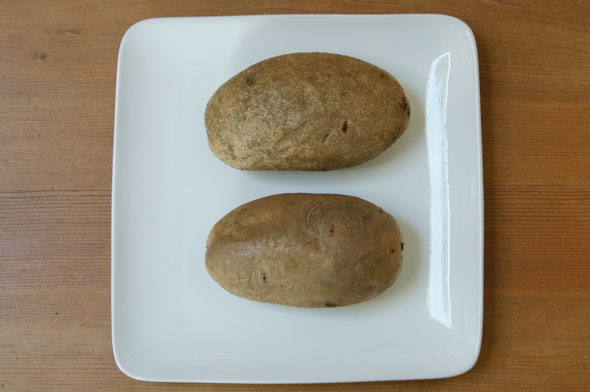 Start with two russet potatoes, about one pound of Idaho's finest will do. Bake them for about one hour at 400°. (Actually, if you have any old potatoes, use them in this recipe. Older potatoes have a higher starch content and your gnocchi will be even better.)

When the potatoes are tender, about one hour, remove them to a plate and let the potatoes cool for ten minutes. Cut the potatoes in half length-wise and use a spoon to scoop the flesh into a bowl. Discard the skin. 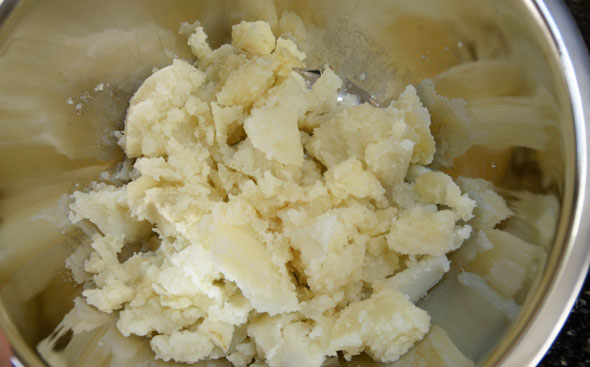 It is traditional to run the hot potato flesh through a ricer, but if you think I was going to get my ricer off the shelf and get it dirty for two potatoes... well, I am not going to do that. It is also possible to push the potatoes through a wire sieve to "rice" them. Me? I broke the potatoes apart with a fork. 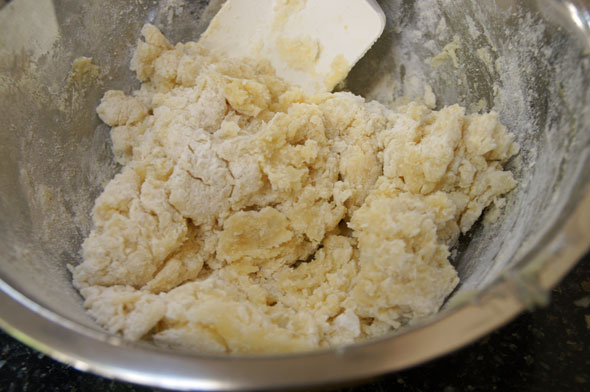 Then, while the potato is still pretty hot, mix in a beaten egg. Stir quickly so the egg does not cook and then add about 1/3 cup of all-purpose white flour and the salt. Mix well with a spatula or wooden spoon, adding a little more flour until it feels like a very soft pizza dough. The amount of flour is going to vary with the size of your potatoes and the size of your egg. I used 1/2 cup today. 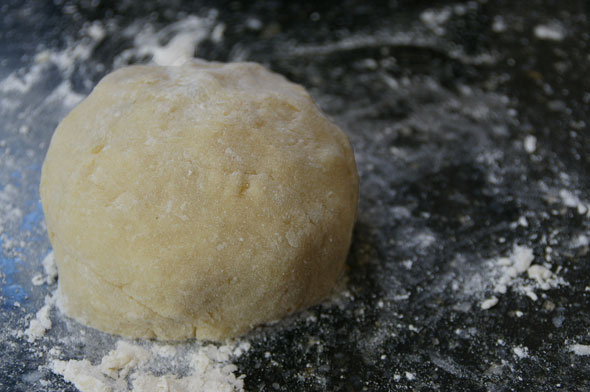 Turn the dough out onto a floured work surface and knead it for about one minute, until fairly smooth. Incorporate more flour as needed until the dough is not sticky, but is still soft. It is important to work quickly - the dough should be warm throughout the process. 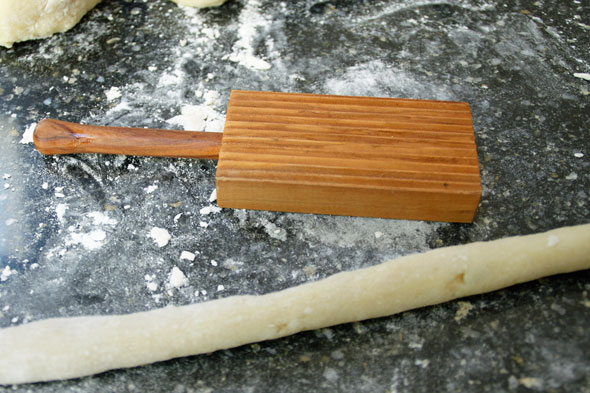 Divide the dough into four even portions and roll each portion out into a long sausage, about the thickness of your thumb. 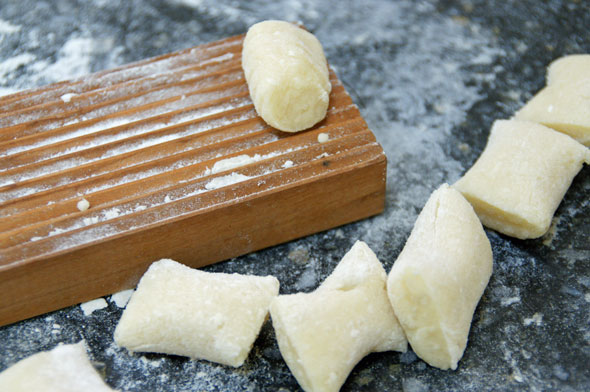 Cut into 3/4-to-1-inch long segments. If you choose, you can roll the potato dumplings on a gnocchi board to leave a slight indention on each gnocchi. It is not necessary - just traditional. Some chefs swear the little ridges hold the sauce better. (The best gnocchi ever is served at Biba in Sacramento, and Biba does not roll her gnocchi at all. So there.) 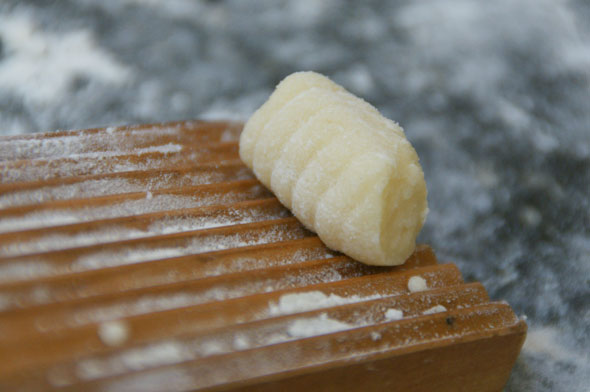 But I bought a wooden gnocchi paddle when we were in Italy a few years ago ($2) and, dang it, I use the paddle! 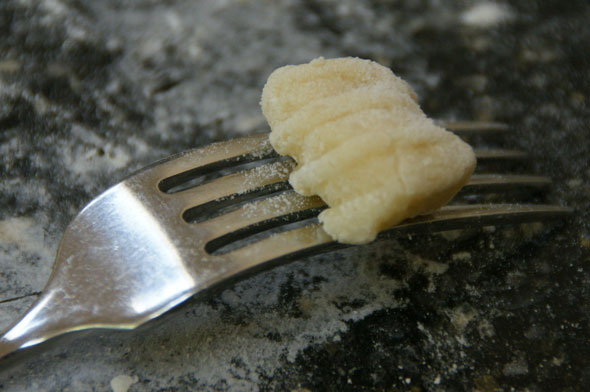 If you are not going to Italy in the next day or two, the back of a fork works as well. 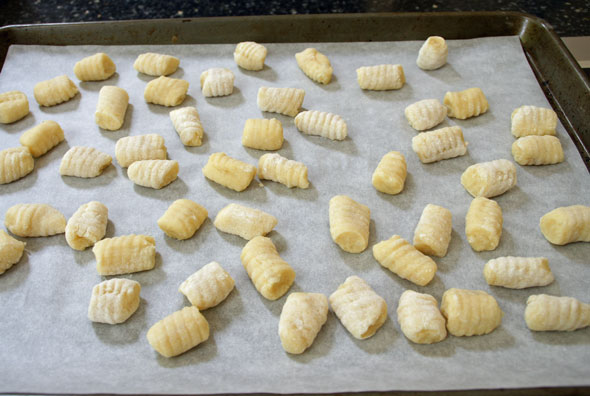 Continue rolling (or not rolling) the gnocchi, repeating the process with the remaining three portions of dough. Place the finished dumplings on a parchment paper-lined baking sheet. Today, I ended up with just over 50 gnocchi. At this point, the gnocchi can be cooked right away, or covered with a kitchen towel and refrigerated for a few hours before boiling. Another option is to freeze the gnocchi on the tray and then transfer the frozen pillows to a freezer container or ziptop bag. 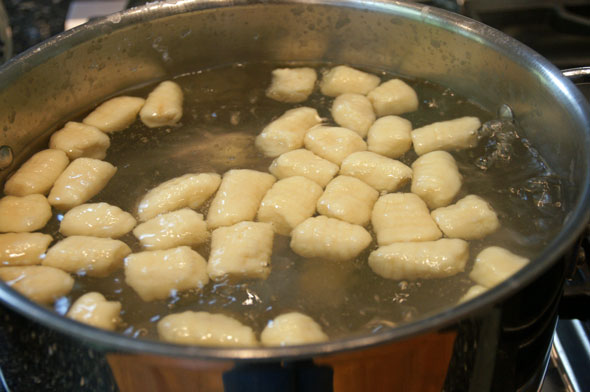 To cook gnocchi, simply drop them - in batches, do not crowd the pot - into a large pot of salted boiling water and give them a little stir. The gnocchi will sit at the bottom of the pan for a minute or two and then will float to the surface. When the gnocchi float to the surface, they have finished cooking... though I usually let them bubble at the surface for 30 seconds or so before removing the gnocchi with a slotted spoon. (To cook frozen gnocchi, simply drop the frozen dumplings into a pot of salted boiling and water. They will pop to the surface when they have finished cooking, but it will take about five minutes.) 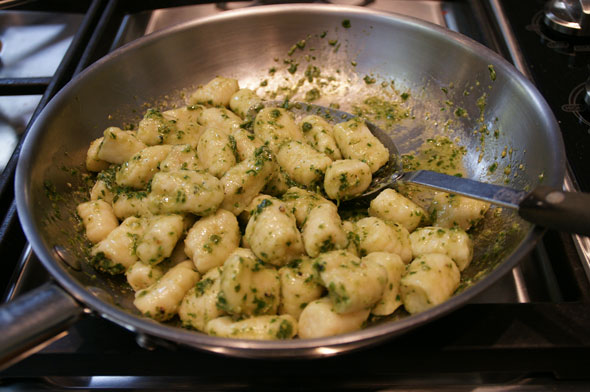 Transfer the gnocchi directly to the waiting warm sauce, give it a quick stir and serve! Serves 2-3 as a main course, 6 as an appetizer course.

This afternoon I made a simple pesto sauce to serve with the gnocchi. I used leaves from three stems of basil, a handful of toasted pine nuts, two cloves of garlic, salt, pepper and a good glug of extra virgin olive oil. I whirled it all in my mini chopper for a few seconds. 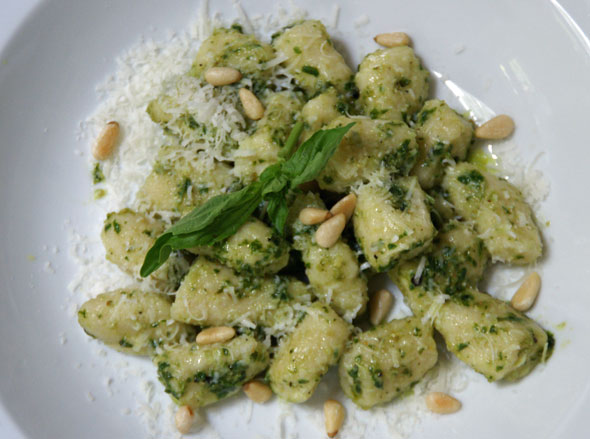 I used about half of the pesto sauce to dress the gnocchi tonight. The dish was topped with a little freshly grated pecorino and a few toasted pine nuts. Perfect! 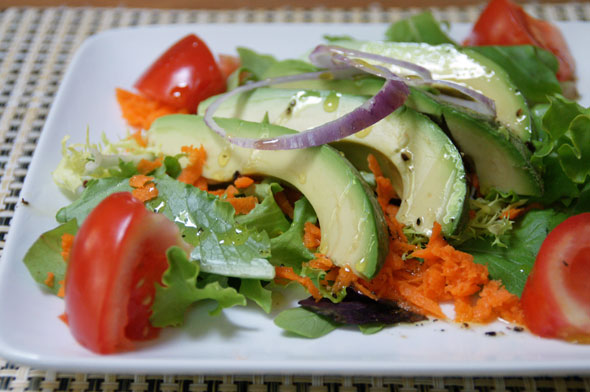 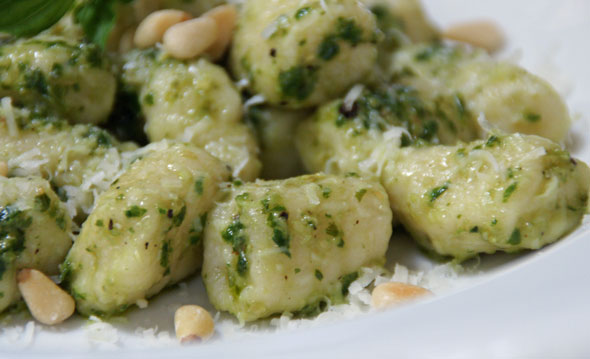 I hope you are inspired to make gnocchi soon for your family! Until my next update, I remain, your plump and fluffy correspondent.
« Steakhouse Steaks Mother’s Best: Pan-Seared Cod Puttanesca »