Indio, California: Crystal was chastising me because I have not posted very often lately. I told her there was nothing to blog about. Reading that someone woke up, drank coffee, went for a walk/jog, went out for tacos, needlepointed, took a nap, then cooked dinner? Really? Must be the most boring journal entry of all time. But that is a typical day around here.

But then I looked at the photos on my phone and realized we really did a lot last week. Three nights, we had guests for drinks/dinner. Our week (insert the part about coffee, exercise, etc., daily):

Last Sunday was a no-cook evening. No one wanted to leave the resort anyway, due to Coachella traffic - so wasn't it great that our on-site real estate agent, Kerry Johnston hosted his annual cocktail party at the clubhouse? Every year Kerry invites everyone in the resort to a party to thank new owners/old sellers and anyone who is thirsty. Servers pass tenderloin sliders, huge shrimp skewers, chicken quesadilla roll-ups and other delightful appetizers, while the bartenders are slinging drinks as fast as you can say martini. We had a lot of fun schmoozing with neighbors and snacked enough to not need dinner. Thank you, again, Kerry, for another wonderful evening.

Monday I tried the first trial of an easy handful-of-ingredient BBQ meatball recipe that is prepared in the crockpot. I will try it again and if it works (and it will), the recipe will be posted next week. 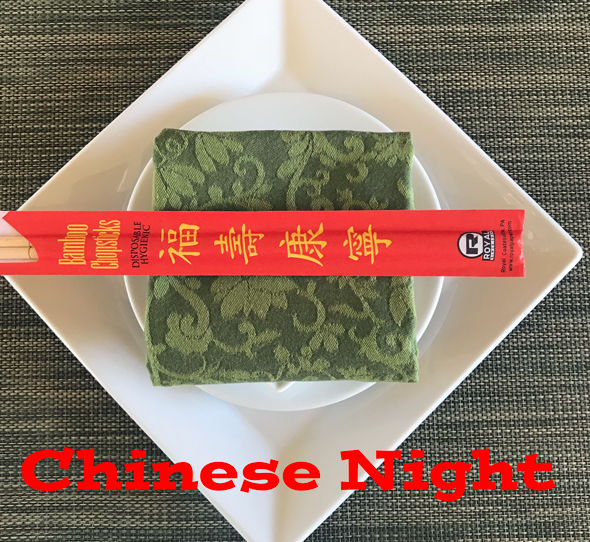 lot of clean up. Splatter City. Our menu: 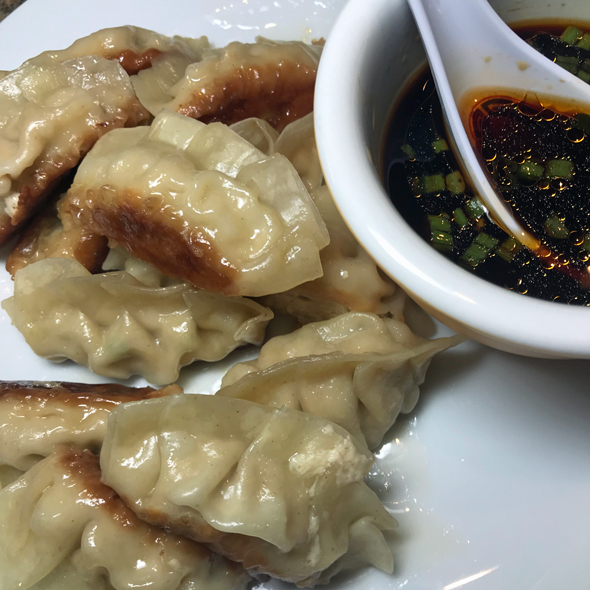 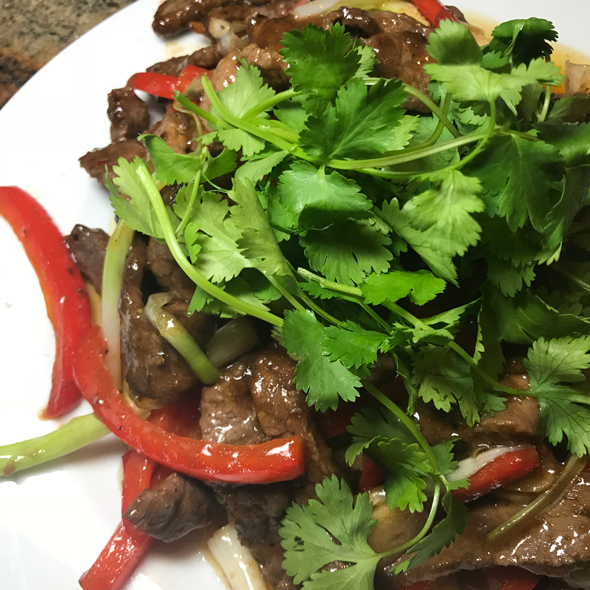 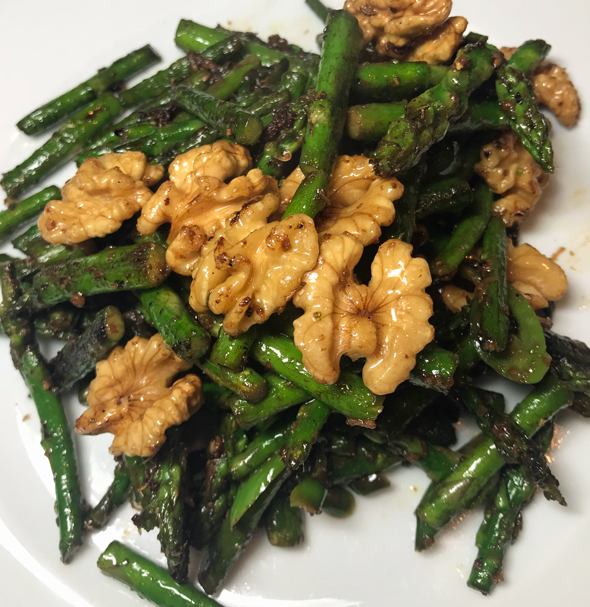 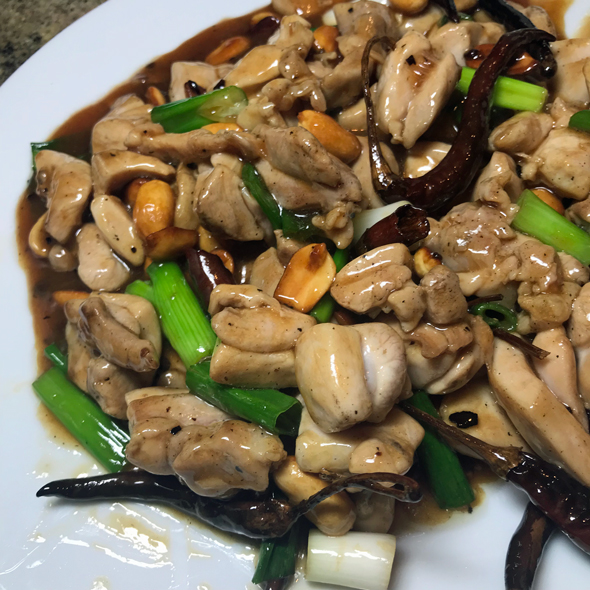 Everything turned-out fairly well and Colleen, Rick and Tom went home with full bellies. Colleen and Rick flew home Thursday for the summer and were greeted with two feet of snow on their patio in Calgary.

I took Wednesday off from kitchen duties - too much chopping for Chinese Night - and we had dinner at one of our favorite restaurants in La Quinta, Brasserie Bistro. In the past few years, we would dine here at least twice a month, but this season, we have only been about three times - too busy. So sad, because the food is so good and the restaurant is so close to our country club.

On Thursday, I harvested 45 cherry tomatoes from our farm field little flower pot. 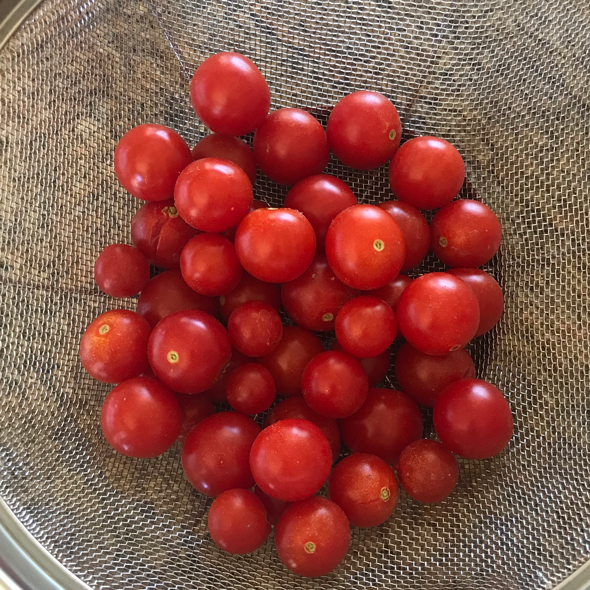 Michelle and Lisa - ready for Beyoncé

But her Dad and I had plans of our own Saturday night. Dinner and a show! We had early dinner reservations at Le Vallauris, a fancy French place in a historic old home downtown Palm Springs. Dave and I have been wanting to try the restaurant for a long time, but never seem to be able to rally ourselves for the 45-minute drive west to Palm Springs. But since our show tickets were for the Annenberg Theater in the Palm Springs Art Museum - literally across the street from Le Vallauris - tonight was our night.

Oh goodness, we just loved the experience. The food. The uniformed waiters. The gorgeous patio filled with huge old shade trees. What a night. I had the prix fixe menu, which started with a mise en bouche,, or a little starter course. Tonight this appetizer consisted of three teeny bites: cold Vichyssoise (pureed potato and leek soup, served in a miniature martini glass, and was meant to be sipped - not eaten with a spoon - very cute), house-smoked salmon on one tortilla chip with guacamole, and a finger-sized portion of chicken liver pate on toast (Dave ate the pate). 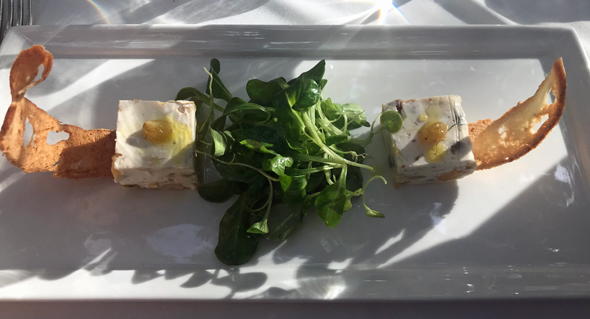 Chocolate Lava Cake with Pistachio Gelato.
The little shortbread cookie holding the scoop of ice cream was the best thing on the plate.

Though practically starving ourselves all day in anticipation of this meal, neither of us could finish our dinners... and were too unorganized to remember to bring ice packs for a doggie bag - FOR THE COOLER THAT IS ALWAYS IN THE BACK OF OUR CAR!!! Our meal was a full two hours of eating though, and it was now time to walk waddle across the street to the theater to see our friend and fellow camper, Richard, perform his solo tonight at the Rocket Man (the music of Elton John) Concert. The performance was presented by the Coachella Valley Modern Men Chorus (modern because they used to be the gay men's chorus, but are now inclusive of all men!).

During the first half of the show, the choir wore black slacks, black sport coats and bright orange tee shirts. At the break (which allowed the audience time to enter a drawing for two tickets to see Elton John perform in Los Angeles this January... that we did not win...), the singers changed into the most colorful, glittery, shiny and outrageious ensembles you could ever imagine Sir Elton John wearing on stage. Inspired!

A great concert and, really, just a great date-night out with my wonderful husband.

But that wasn't the end of our night. How old do you have to be (and how old do your children have to be) that you worry about them getting home safe? We knew Coachella would go on until at least one o'clock in the morning... but then there is the wait time for an Uber or bus. 125,000 people exiting the polo fields at the same time is well-orchestrated by the festival presenters, but, still...

I was still tossing and turning at 2a... and as long as I was awake in the middle of the night, began watching Mo Farah - LIVE FROM LONDON - in his first big road race, the London Marathon. Sir (Mo was knighted in November by Queen Elizabeth) Farah was attempting to break the 33-year-old UK marathon record (2 hours, 7 minutes) held by Steve Jones.

The girls came home (starving!) (cheese and crackers!) around 2:30a, and I dozed on and off, while trying to stay awake to watch the race. Mo did break the record and finished in third place at 2 hours, 6 minutes. The heat was as blistering as the pace, as the elite men ran the first half - OF A MARATHON - in 61 minutes. Crazy fast. Things slowed-down quite a bit as the heat and fast pace took a toll on the racers. Eliud Kipchoge, of Kenya, won the 2018 London Marathon in 2 hours and 4 minutes.

Lisa and Michelle returned to Los Angeles this morning.

Until my next update, I remain, your "maybe we did do a lot this week" correspondent.