SIDEBAR: Every Olympic sport has a governing body. World-wide, track & field is under the International Association of Athletics Federations - IAAF (T&F is referred to as "athletics" everywhere except America) and is then controlled in the USA by United States Track & Field - USATF. That's just a wholebuncha bureaucracy and rules to follow! Of the hundreds of track meets held around the world each spring and summer, the IAAF has sanctioned 14 meets as "Diamond League" meets. Professional athletes competing in these prestigious meets earn points and cash for winning, with the ultimate goal of winning the most points throughout the season to become Diamond League champion. The Prefontaine Classic is one of the 14 meets included in the money grab!

I'm not going to report on all the races, because I am not a sportswriter. You can findresults online, and most-likely in your Sunday newspaper. I will just post a few photos and tell you about what I found interesting about the Prefontaine Classic. 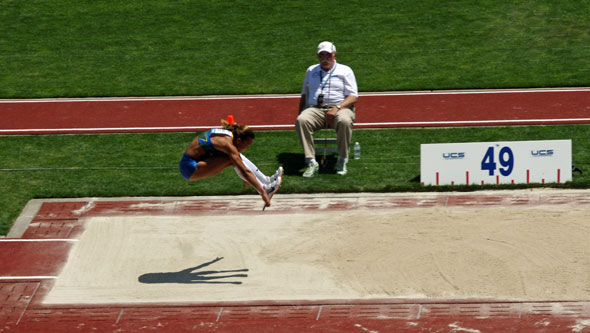 This is Keila de Silva Costa of Brazil. She finished 5th in the triple jump this afternoon. I just liked her shadow in the photo. 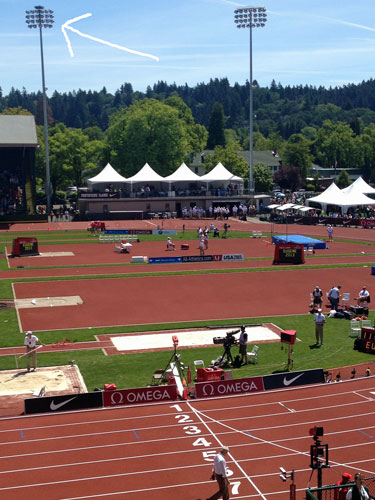 The University has been fighting with an Osprey family for several years. The birds have been making a nest on top of a light pole in Historic Hayward Field. When the lights are turned on, it is a fire hazard, quick incubation/steaming of the eggs/babies and we do not need to mention the amazing amount of debris/sticks/poop found under an osprey nest. They started building a nest again last year, right before the Olympic Trials and the University had the nest removed. There was fear the babies would be only a week or two old when the track meet started and the lights at night, the guns fired to start each race and crowd noise of 20,000 people a day could cause the parents to abandon the babies. 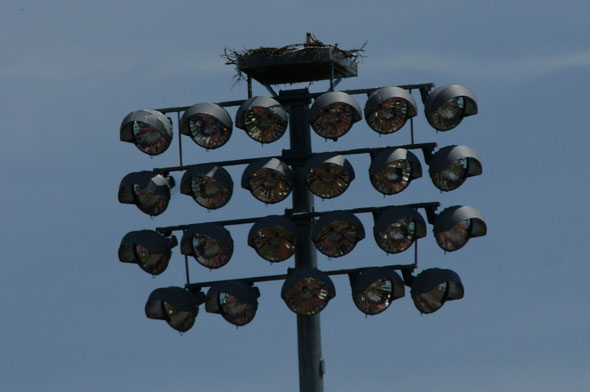 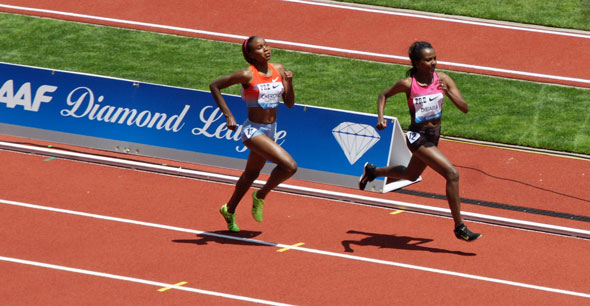 One of my favorite athletes, Ethiopian Tirunesh Dibaba, won the 5000m. Dibaba is tied for first place in Diamond League Points. Feisty, always smiling and incredibly pretty, this absolutely teeny athlete and very popular with the fans.

The WGA was in the house! Olympic Gold Medalist and World Record Holder, decathleteAshton Eaton was at the track meet and was introduced to the crowd with his lovely fiancee, Canadian Heptathlete, Brianne Theissen. Mr. Eaton was watching the meet with a little boy fighting cancer. 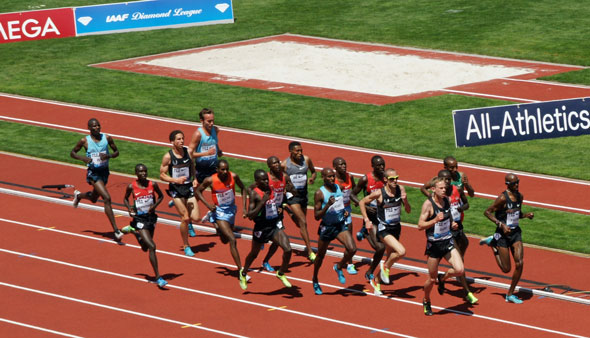 The men's 5000m race was loaded. Olympic 5000m & 10000m champion, England's Mo Farah was the featured star, but the line-up also included five Americans, including Galen Rupp, Lopez Lamong, Bernard Lagat and Dathan Ritzenhein. Again, not a speedy race, but it was interesting to watch as the racers remained in a tight group throughout, only to sprint for the finish in the last 600m. Mega-Star Mo Farah was nipped at the tape by Kenya's Edwin Soi. Wow. Good stuff for us distance junkies. 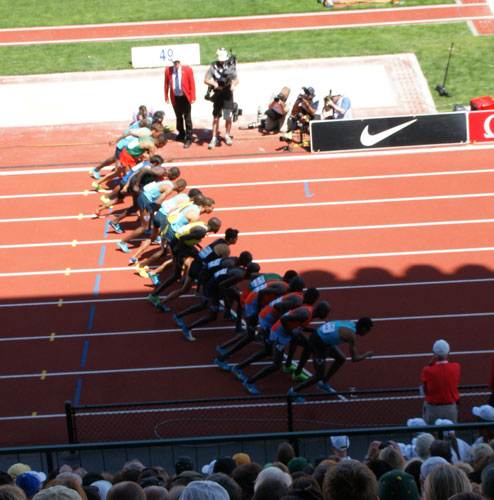 The last - and always most anticipated - race at the Prefontaine Classic is the Bowerman Mile. Not a 1500m, a mile. Hundreds of athletes have finished under four minutes on this track during this event over the years. 16 men (and two pace-setters) raced today and 15 ran sub-four minutes! 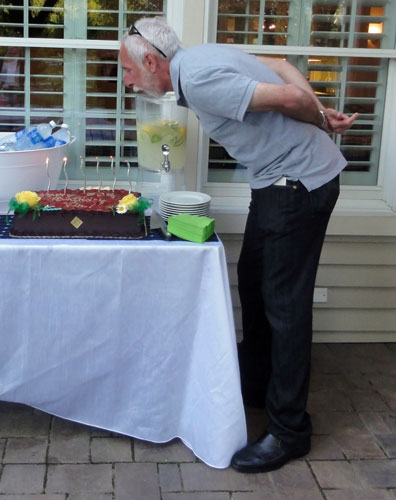 After this exciting day, DT and I were invited to a surprise 60th birthday party for Vin Lananna. It was a surprise too, as his birthday isn't for a few weeks but the track meet was a good excuse for his kids (and 4 month old grandson) to "just happen" to be in town. Vin never figured it out and was totally surprised when he walked into Greg and Ann's house to be jumped by many of his friends.

Ann and Vin's wife, Elizabeth, had gathered hundreds of photos - from birth to present day - to make a fun slide show. Friends who could not attend the party sent video greeting from around the world. After a delicious dinner, a huge, rich chocolate cake topped-off the evening. 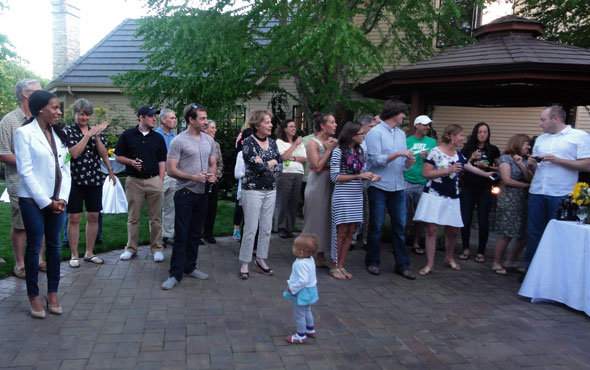 Friends and family sang Happy Birthday to Vin. A great night and it is always good to surprise someone who just hates surprises.

You may also like:
The Eugene Register-Guard has incredible photos of the meet.