Indio, California: When you last heard from me, we were in Las Vegas. Well, we have returned to SoCal and it has been another wild week of doing nothing, yet keeping so ridiculously busy. How does that work? Not sure, but isn't that what being retired and living "the RV lifestyle" is all about?

Like most of California, we have not had the best weather lately, with a bit of rain, cool (70°) sunny days and chilly (50°) evenings. Very unusual for late March, but you all know how much we need the rain. Even with the weather, we are harvesting a handful of cherry tomatoes from our vines daily.

We invited friends to share our annual Corned Beef and Cabbage on Saturday, and the Motorcoach Country Club held their annual St. Patrick's Day Golf Scramble today. This is a very popular event. Today there were 90 MCC members playing in the tournament - nine teams of ten - drawn at random. Dave's tensome placed 4th overall and he won a few sleeves of golf balls for capturing "closest to the pin" on one hole. DT was happy to receive his prize, as he donated several golf balls to the lake this afternoon. He also thought to snap a few photos: 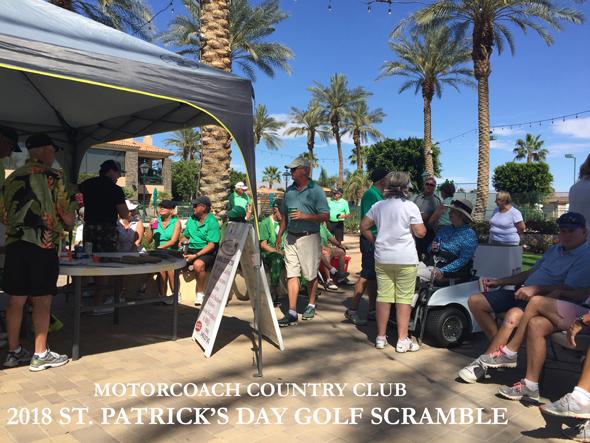 You must admit, some people really give it their all.

And now, some track talk. A few weeks ago, I received an email from Dave's high school athletic department asking for a photo of one of their most talented alums. The school is updating their training facilities and will place poster-sized photos of their most accomplished athletes on the wall - to inspire the current student-athletes to greater glory. They asked for a photo of Dave running. Easy. In an Oregon singlet. No problem. The photo would need to be high resolution, as it would be super-enlarged. No problem. Most photos of Dave during his college years are in black and white, and that was fine.

Y'all may recall (or not) that a few summers ago was devoted to organizing and scanning every photo in our possession. (The scanning job was sent-out to a professional.) Then... wait for it... we shredded every photo. Shredded. Gone. Done. It is the most wonderful feeling in the world - especially in my quest to purge belongings and simplify our crazy two-state life.

After looking through all the (organized, cataloged, in a cloud... okay, two clouds and a hard drive) photos of Dave running (it takes a while), I decided there was only one photo that deserved to hang in the Hallowed Halls of his high school - and it was one sitting in a frame at our house. In Portland. All my efforts to scan every photo in our home? A few framed photos slipped through my net.

Dang. Back to work, Terry.

Not to worry. Our house sitter carefully removed the 44-year-old photo from the frame, we had it scanned at 600dpi, and it has been emailed to Merced. A very happy coach responded with his thanks. This should inspire a few runners to go an extra lap or two: 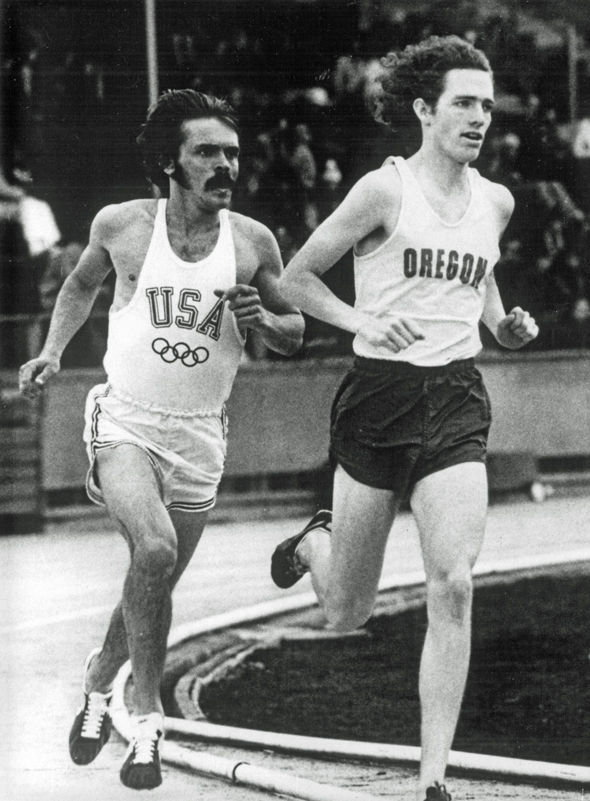 What is the caption to this photo? Dave Taylor beats Steve Prefontaine at Historic Hayward Field? No. Steve Prefontaine laps Dave Taylor in a blazing 10000m? Nope. The real story: In April of 1974, Steve Prefontaine (already graduated from the University of Oregon) attempted to break the American 10000m (6.2 miles) record. That's 25 laps around a track, people! A skinny 19-year-old freshman, Our Own DT, was asked to rabbit. Dave was summoned to set a fast pace through the first two or three miles... then he could step off the track. Pre did set the American record that evening in 27:43. The record stood for another five years and has since improved to 26:44 (set by Galen Rupp - another Duck) in 2014).

Until my next update, I remain, your out-of-breath correspondent.