Indio, California: No matter how carefully we have planned our departure check-list and schedule... I thought today was Wednesday until about noon, when I noticed my friend on Instagram posting TBT photos people mentioning it was, indeed, Thursday.

Our week (so far) in review:

MONDAY: Normal busy schedule with exercise and DT on way-too-many conference calls... but also our last "normal" day at the Motorcoach Country Club, and the last night I will cook dinner in our outdoor kitchen for quite a very long while.

We started our final-week-in-Indio lunch tour at Tacos Gonzalez. Nothing unusual there. Two chicken tacos. We are going to miss this restaurant (Hwy 111 & Jefferson) so so so so so much when we leave next week.

Hot Browns I made for the Kentucky Derby, I made Carbonara (with spaghetti pasta) as our Last Supper. I am going to tell you, the uncured turkey bacon from Applegate Farms can't even be called a substitution - it is simply perfect in Carbonara. No nitrates. No chemicals. No pork. 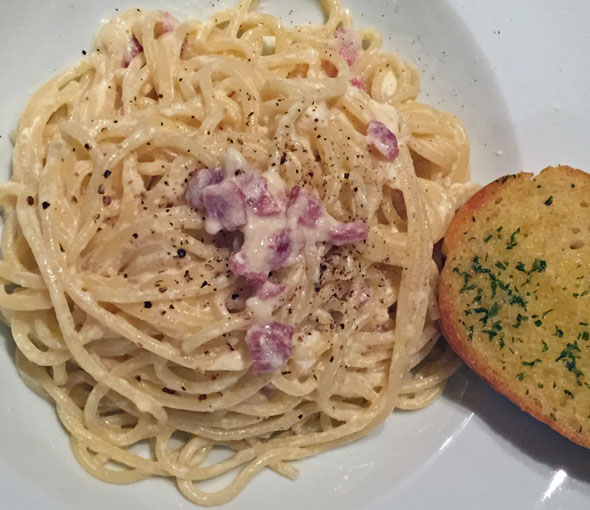 Also had Texas Toast left over!

TUESDAY: Cinco de Mayo. The day the Mexican Army defeated the French Army in the Battle of Puebla in 1862. Our farewell lunch tour took us to Stuft Pizza in Old Town La Quinta for their delicious BBQ Chicken Salad. 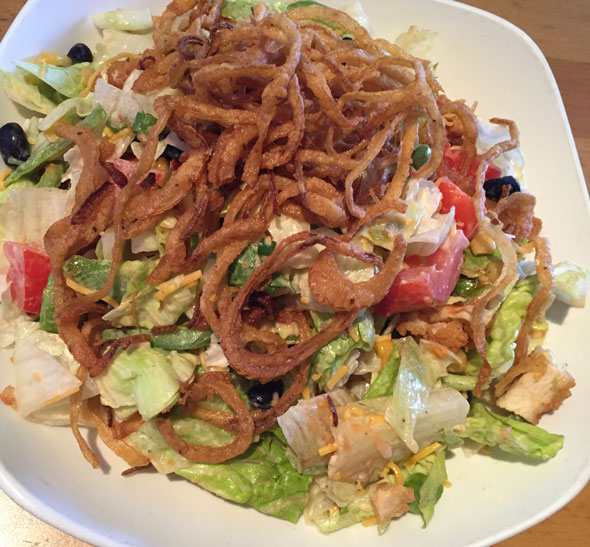 I could roll in it.

I love it so much, I have tried my best to copy the recipe - though without the fried onion.

The Motorcoach Country Club restaurant and bar is usually closed on Tuesday... except if Cinco de Mayo happens to fall on a Tuesday... so Tuesday the staff really did-it-up for the few remaining campers holding-out at our resort. A full Mexican menu, margaritas, Mexican music and a very festive atmosphere all-round. 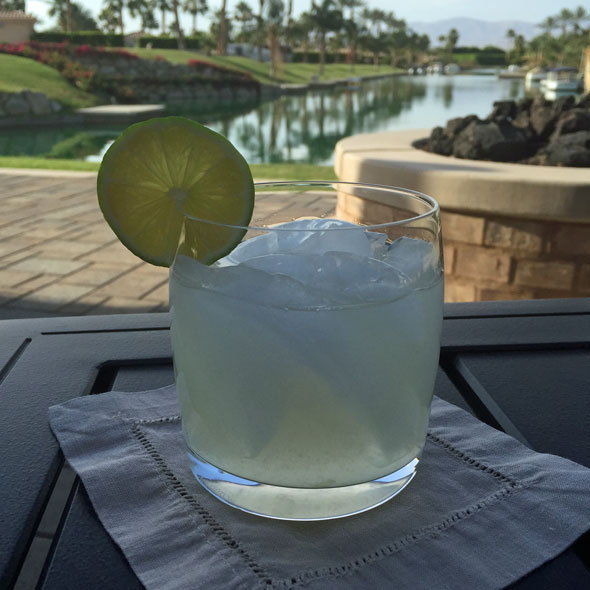 Ever fearful of the dreaded sweet and sour mix, I made a Real Margarita before heading up to the clubhouse for dinner. 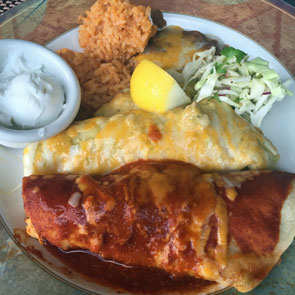 We were a table of six - with Sally & Alf, Mary and Captain Jim. Enchiladas and nachos and plenty of beer for our group. It was a very fun night and we are all so proud of the Mexican Army!!!

The restaurant at the Motorcoach Country Club - Top of the Falls - will close for the season Saturday night, so we have vowed to go the restaurant every night this week for dinner, or - at least - a drink.

WEDNESDAY: Proved to be a very strange day. 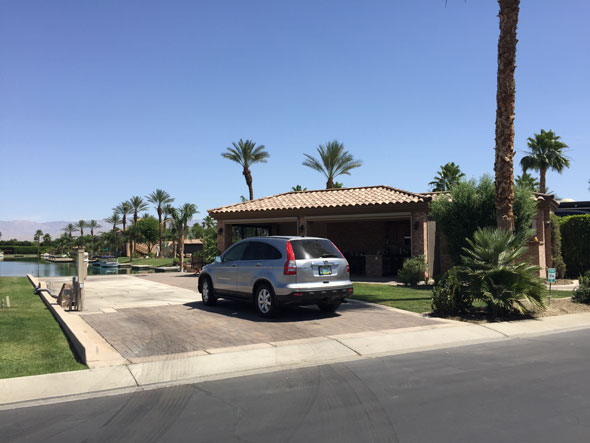 Notice anything missing from our campsite? DT took the bus to some dude in Indio to have the dash air conditioning re-charged (or whatever they do these days to make cold air flow from the dash vents - Freon?). Happily, our bus started right up, the slide rooms retracted and DT needed only two attempts to extract this massive beast from our non-angled driveway. He wasn't gone long... but our campsite looked so sad and empty while DT was away. I remained on-site, organizing the outdoor kitchen for summer storage. 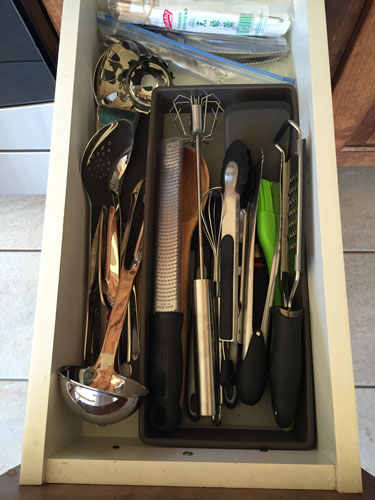 Yes. I photograph and inventory every drawer every year. I'm old, and do not so may not always remember "what goes where" next fall.

After Dave returned, with icy-cold air blowing from the dash and a full tank of diesel, we went with our neighbor, Lois, for lunch to Fisherman's Market & Grill for their famed $7.99 Baja fish taco lunch special. 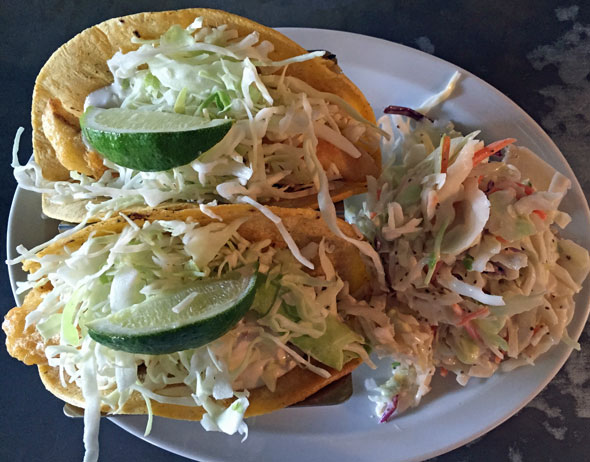 It is sometimes a bit amusing to have lunch at Fisherman's. They probably offer ten different options for their $7.99 lunch special, but everyone orders the fish tacos. Honestly, I can't even recall the other lunch specials. Fish tacos come flying out of the kitchen like it's their job.

Our afternoon chore was to visit the local Costco. The task also allowed us to witness this little situation: 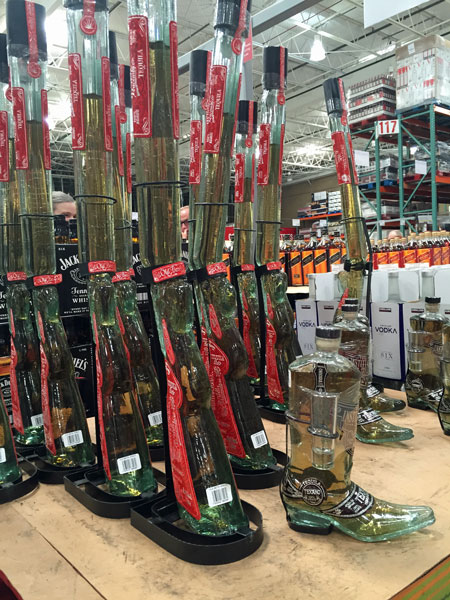 Rifles and Cowboy boots filled with tequila (we did not purchase!)

My clever cousin referred to this as "tequila shooters".

Dinner? We split a quesadilla at the clubhouse.

THURSDAY: The happy news that Oregon-alum and new Tennessee Titan quarterback, Marcus Mariota, is the Sports Illustrated cover boy for the fifth time! Twenty-one years old and on the cover of SI five times. Wow. Just wow. His parents must be bursting with joy. 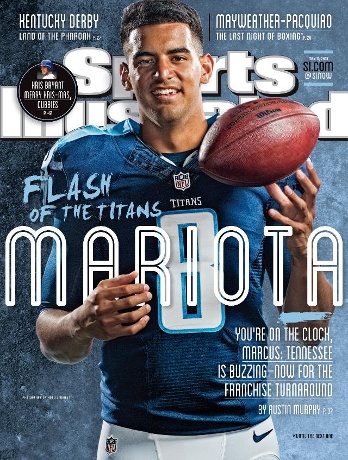 A crew cleaned our motorhome, treated the leather, steamed the carpets (tile and shower) and oiled the wood work. 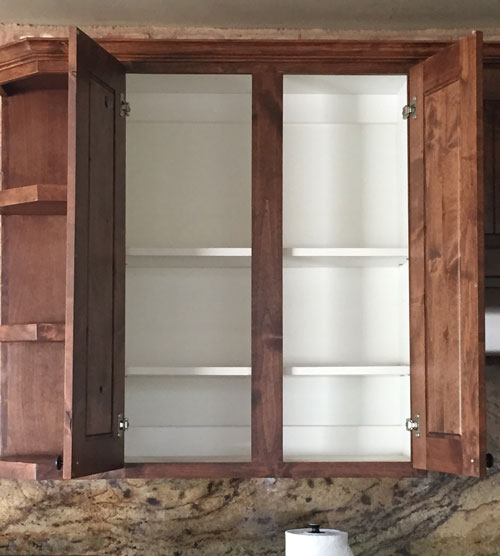 While the bus was being detailed, Dave and I (okay, it was mostly Dave) packed all the recently-inventoried kitchen for safe storage. Everything from the outdoor kitchen is packed and stored in the casita, which we keep air conditioned to 85 degrees, over the hot summer months.

No time for lunch today, but dinner was an au revoir to Brasserie Bistro - one of our favorite local haunts - a French place - with great service, great nightly specials and a menu filled with French favorites (DT had oysters, followed with a small steak with marrow bone). Brasserie Bistro takes the trouble to fly-in oysters from the Pacific Northwest and find fresh cheeses from around the world. (And don't forget, the poor French Army lost to Mexico, Cinco de Mayo 1862, so we needed to give the French some love.) 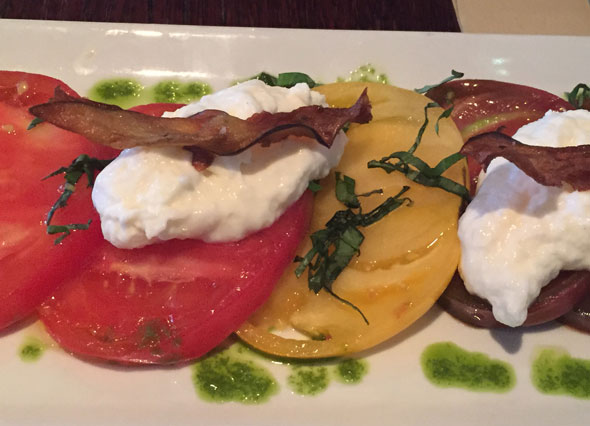 No, that is not bacon over the burrata and heirloom tomatoes - it is a strip of crispy-fried eggplant. Different!

We had a terrible wind storm in the Coachella Valley Thursday evening. Winds over 30mph. Dave and I saw two bird nests blown out of trees tonight (hope the babies had already flown the nest!). Scary night.

There is still a lot of organizing, cleaning, arranging, planning - and tacos - on our weekend calendar. Until my next update, I remain, your four-more-days  correspondent.