Bakersfield, California: We spent much of yesterday with last-minute chores. Remember the adorable vase situation Riki and Lowell gave us last week? The beautiful purple tulips have since faded, but I repurposed the little jars to hold the last of the herbs from our garden pots. 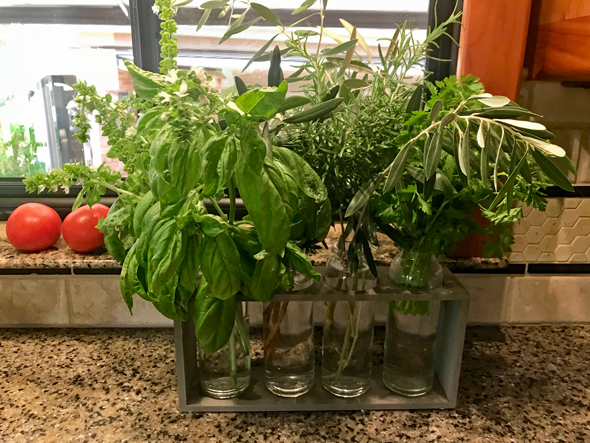 Chapelli’s. Such a delicious Italian meal and special time spent with such a wonderful friend.

Then it was early to bed and early to rise to avoid a high-wind warning expected mid-day. Our ETD was 6a…and it was at precisely six o’clock My Driver started the engine and I pushed buttons to bring-in the slide rooms. This is when we heard an unfamiliar sound. The awning covering the driver-side bedroom slide while extended decided it did not want to roll up inside the cover. We tried again. And again. Possibly again. Finally, with me bringing the slide in a few inches at a time, while Dave “urged” the canvas into the roller (I beleive a broom handle was involved?), we were ready to hit the highway. One hour behind schedule. 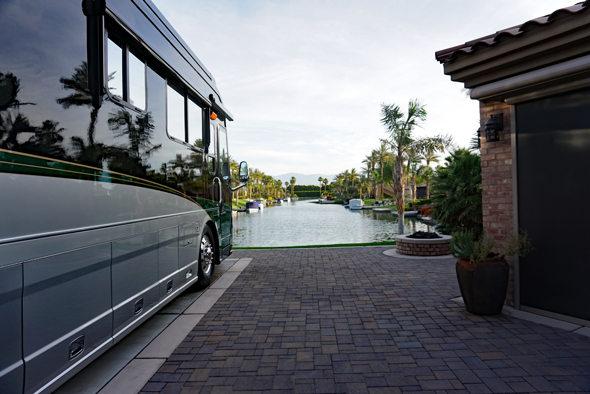 Breaking my "don't get out of bed until the (automatic) lights are off on the dock at the Yacht Club. I'm going to miss this view! 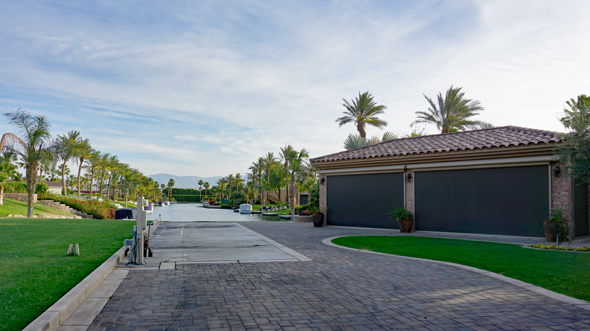 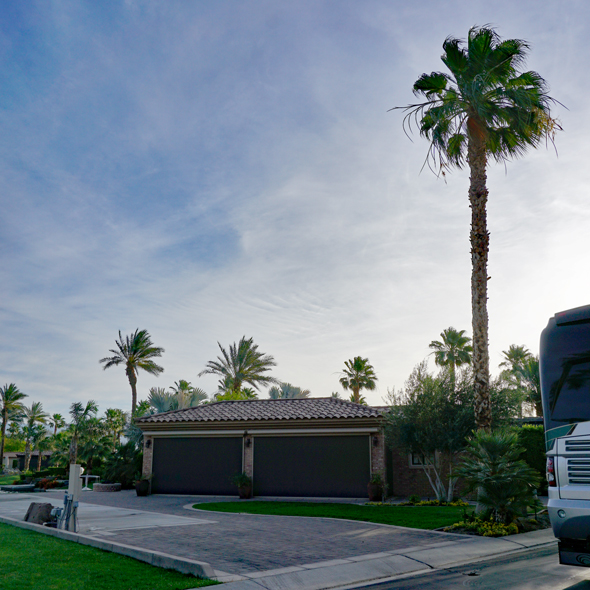 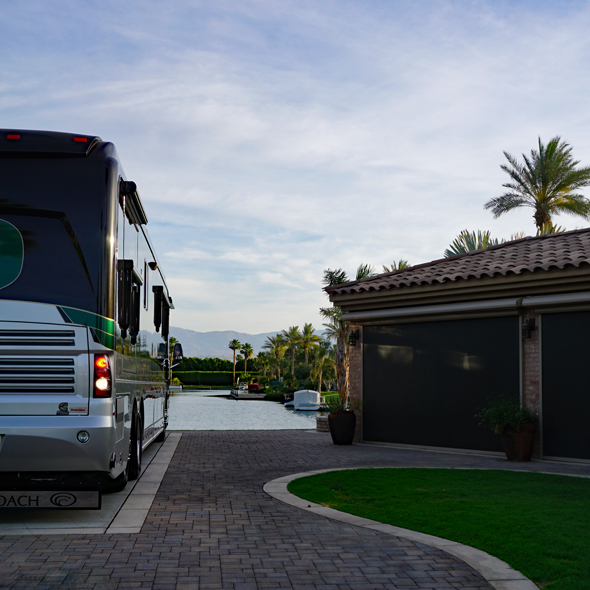 Until the next time.

The wind storm was a few hours ahead of schedule and really hit us hard within the first few miles on I-10 West. As every RVer knows, the first few miles of a trip can often result in a drawer opening, or something not properly stowed falling. Glasses tinkle together. Today we had a driver-side bay door fly open while flying down the interstate. Fun times! Luck was with us this morning, as the bay door opened just as we were approaching a rest area... so My Driver slipped off the freeway, closed and locked the door, and we were back on our way in moments.

Wind turbines were whirring like mad, and a big black cloud was waiting.

We were pretty surprised when our path took us directly into a big black cloud (red arrow above), and the temperature plunged to 60 degrees by the time we were at the top of the San Gorgonio Pass, near Cabazon. Then it started to rain. It was like we were in an opposite climate 45 minutes from Indio. The unpredicted rain event required more weather-related research on the cell phone, and a last-second decision was made to reroute towards Los Angeles, instead of tackling the windy route through the desert and Four Corners. We took I-10 to the 210, and joined I-5 just north of Los Angeles. We had slow traffic and drizzle all morning, until we reached the top of The Grapevine, when the weather returned to blue skies and hot temperatures. The Coachella Valley to the San Joaquin Valley.

Our “lunch” break came at 11a, at the rest stop on The Grapevine. We made sandwiches while parked between someone towing a wooden pirate ship (!), and a tour bus filled with visitors from China. Trump is obviously getting serious with his immigrant policy: the emergency exit on the rear of the tour bus was padlocked - from the outside.

We stopped in Bakersfield for the night and were randomly parked next to old friends from the Motorcoach Country Club - Sue and Gary - and their new Lhasa Apso puppy, Milo. Dang, is there anything cuter than a puppy?

Because the utility box is so far forward at this site, we had to park practically on the street. It's okay, we hope, and the campground has gorgeous blooming roses and a nice pool. 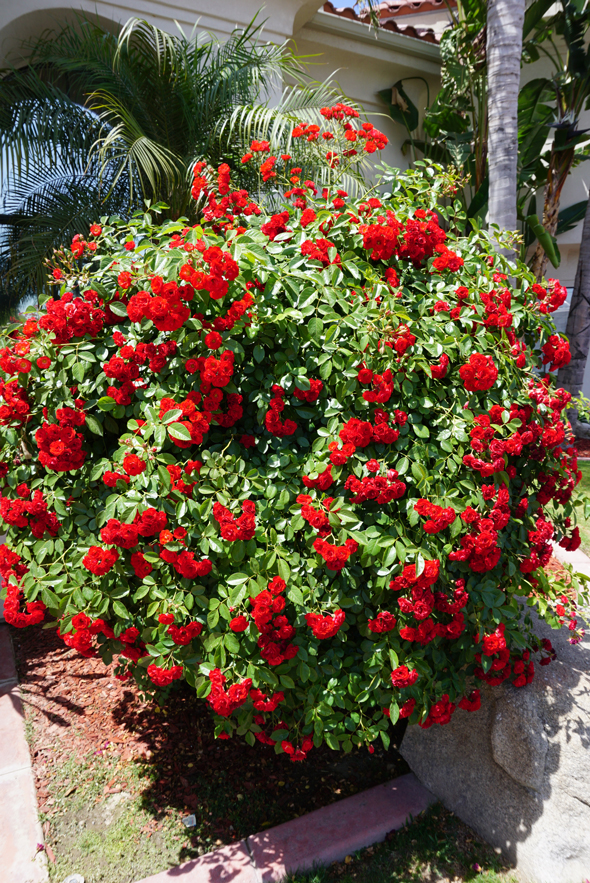 As is our custom, we had a lasagna for our "first night on the road" dinner. Turkey Lasagna, a half-recipe prepped yesterday, along with a green salad. All I had to do tonight was pop the little pan in the oven and toss the salad greens. 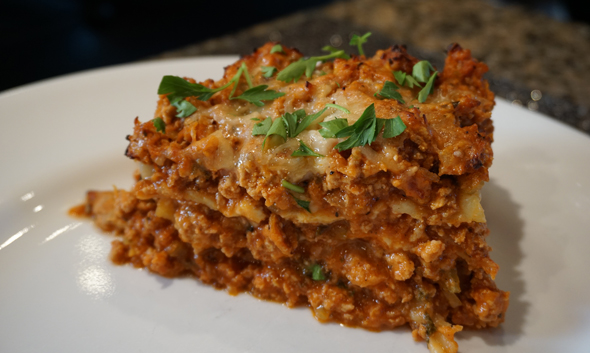 Yes. It tastes as good as it looks.

Until my next update, I remain, your "five o'clock in the morning is too early to get out of bed" correspondent.