Eugene, Oregon: Whatever shell game we were all playing late last night at the RV park - moving from campsite to campsite to find one with working 50 amp power - seemed to sort itself out this morning and we did not have to move again. Most everyone else left (over-night travelers) and not too many other RVs have come in this afternoon. I would almost venture to say "it's quiet"... except for the traffic noise from the Interstate freeway a few feet from my ear.

DT ran in the cold this morning before heading off to his meetings. I remained behind and prepared my RV Lasagna for our dinner tomorrow night. Lasagna is our traditional first-night-on-the-road meal. I don't know why... except probably because it is something I can make ahead? Can't remember. Anyway... today when I prepared my super-easy lasagna, I snapped photos of the process and I will post the recipe tomorrow after snapping photos of the finished product - all bubbly and brown and cheesy. 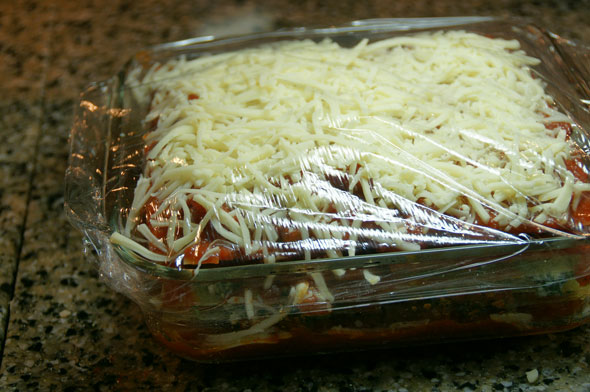 Just after noon, the sun surprisingly broke out and I went for a run on the local roads and around the RV park. I wore a fluorescent yellow stocking cap (with an Oregon Duck logo), green gloves (with an Oregon Duck logo), florescent pink long-sleeved running shirt and fluorescent blue NIKE's. I looked like a moving bowl of Trix cereal. I ran as slow as physically possible for a human to move and not call it "walking". Seriously, it was so cold, but I wanted to run for at least 45 minutes, so I kept telling myself to  "slow down". It worked. I listened to Jimmy Buffett's entire A1A album (yes, it was an actual album when it was released in 1974 - when I was a freshman in college). FYI: A1A refers to the highway hugging the Atlantic Coast in Florida. I still have A1A in vinyl. Wonder what it is worth on eBay??? A tank of diesel?

PS: I do not use/consume/purchase Trix and suggest you do the same.

PPS: You knew that already, didn't you?

DT and I have enjoyed many a fabulous night in Mac Court. In the olden days, we registered for classes on the arena floor. Before computers, etc., we stood in line to get a class and if the class wasn't full, all was good. If it was full, you had to rush around and rearrange your entire schedule. It could take hours. In the 1970's we saw James Taylor at Mac Court for $3. Jimmy Buffett for $3. (We also saw Steve Martin - at the next-door student union - for $5. After his show, Steve Martin walked with the entire crowd to the campus-area McDonald's and ordered 800 hamburgers. Then he said, "Wait, make that one large fry." Oh, goodness, those were the wild-and-crazy days.) In the 70's, the University of Oregon had a fabulous basketball team - the Kamikaze Kids. If you are interested in the history of McArthur Court, The Oregonian printed a very good story this year. 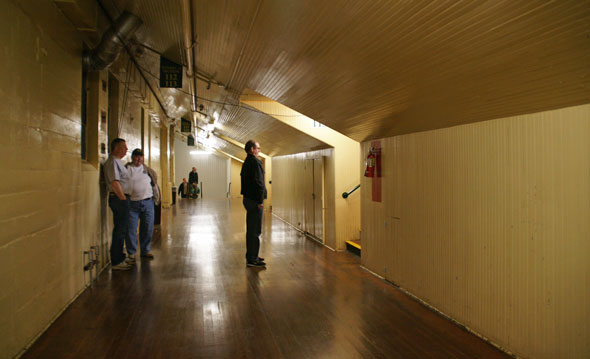 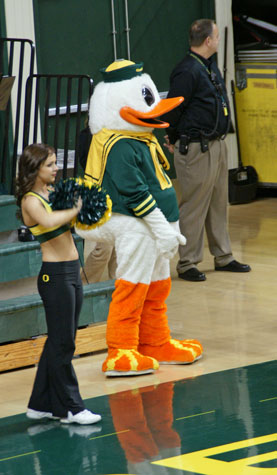 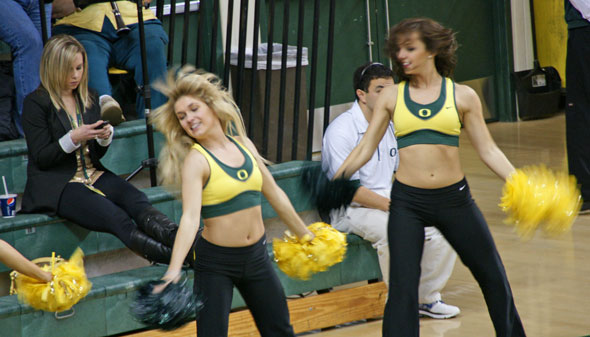 With school out for the break, only four cheerleaders were at the game. I love the flying blonde hair, but my camera focused on the woman texting on her cell phone. I'm pretty sure she was emailing her bookie and telling him to not bet on The Ducks tonight. 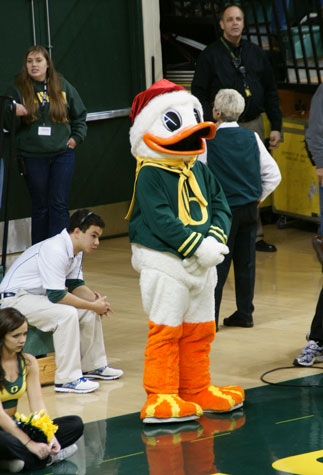 So where do you suppose a Duck goes to buy a Santa hat? Mascots-R-Us? 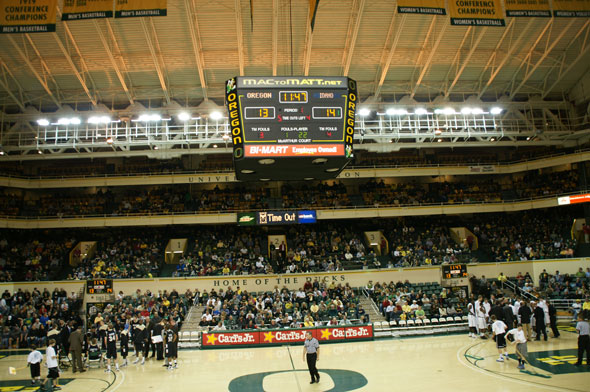 McArthur Court, in all her glory. Second-oldest arena in the NCAA. 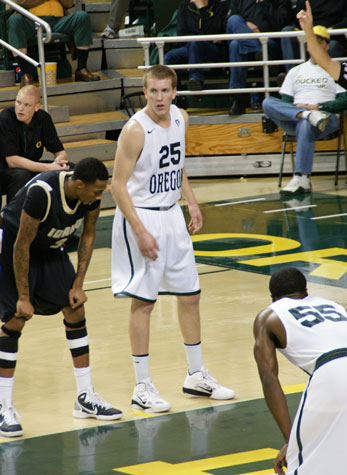 The Ducks have this guy - E.J. Singler. Maybe you have heard of his older brother, Kyle? Kyle plays for a little school out in North Carolina called Duke. Kyle is from a small town in southern Oregon and broke a few hearts when he left for Duke. His younger brother, E.J., decided to stay/play for Oregon. We are very grateful. 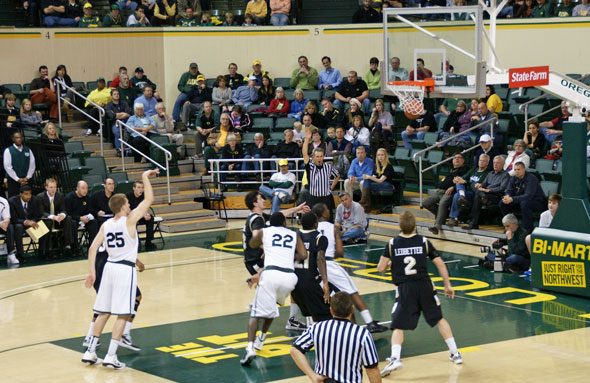 The kid can actually make a basket. 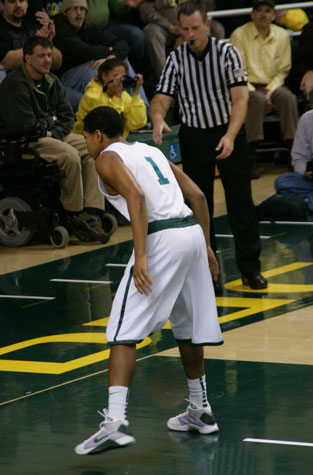 The Ducks also have this kid - Nick Fearn. Remember when his Dad stopped by our tailgate party? (Nick was in for one play, fouled and we didn't see him for the rest of the night.) 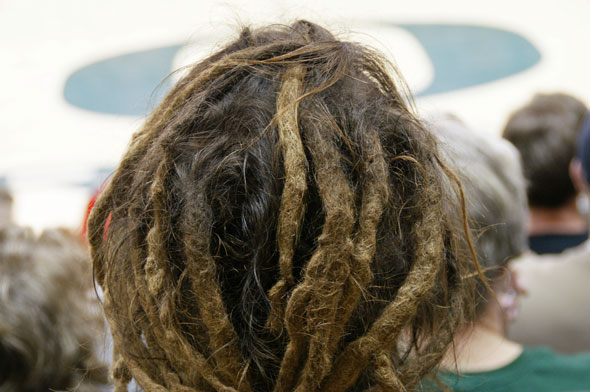 It was the usual Eugene cast-o-characters at the game tonight. 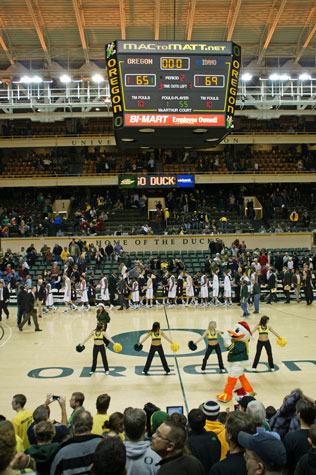 65-69. Not the way I wanted to remember my last game at McArthur Court. No matter. I've seen more wins than losses in this arena. More good memories than bad. More happy times than sad.

Tomorrow we head south. The Siskiyou Pass has received quite a bit of snow. We are planning our route so we cross the mountains mid-day - when things have warmed-up a bit and after the snow plows have done their job. Hopefully we will make it over the mountains and end up south of Redding, California... where we can enjoy that lasagna in peace.

Until my next update, I remain, your McArthur Court correspondent.