Canyonville, Oregon: There is something so wrong about waking up in a cold, dark, rainy morning and leaving your campsite before sunrise. Miserable... yet thankful my role in our departure routine is mostly indoors. DT gets to unhook/unplug. I batten-down the hatches and get the car ready to tow. Commuter mugs filled with strong coffee, we delivered the Magna Peregrinus to Cummins before 8 o'clock, and had to amuse ourselves in Eugene until Cummins had completed the annual lube, oil and filter servicing - approximated to be around noon. 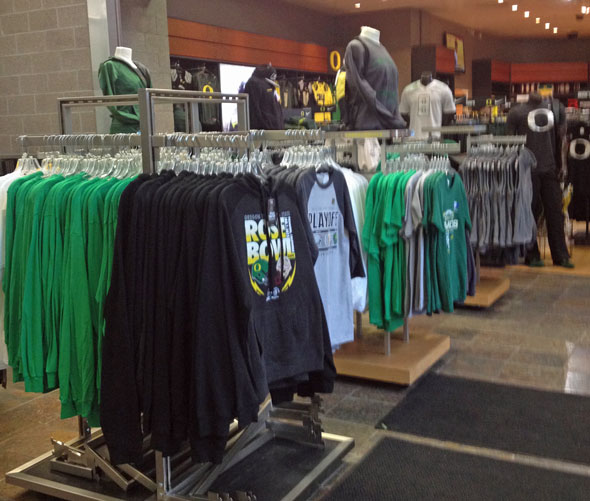 The Duck Shop, at the Athletic Department

We went out for a long breakfast and ran a few errands. We had a 20%-off coupon to the Duck Shop, so visited the branch at the Athletic Department. Wouldn't you know it? Nothing seemed to jump-out at me. The grandkids are set for Duck gear. The Rose Bowl tee shirts were not very appealing. I finally found a very cute new dog collar for our grand-dawg, Reese. Wouldn't you know it? The 20% coupon was good at everystore location except the Athletic Department. Rat farts! I bought the collar anyway - Hanukkah starts next week and we don't want to forget our little Kosher Dog.

Speaking of the Rose Bowl, the University announced yesterday the team will be sporting classic green uniforms for the big game: 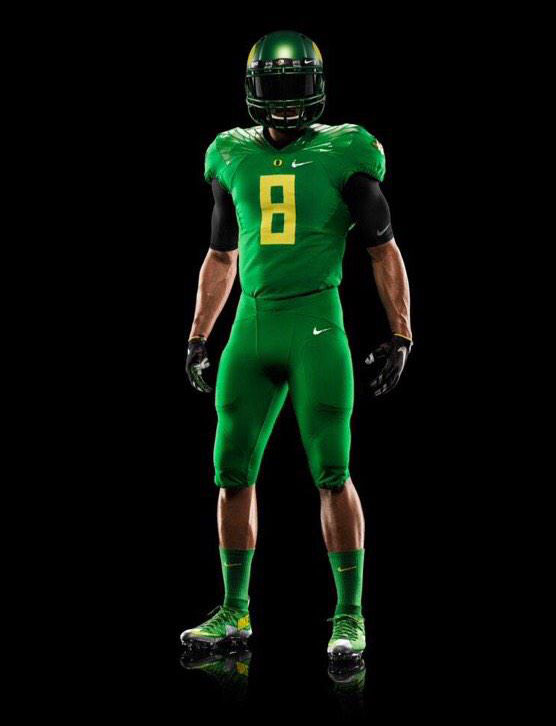 I don't suppose any one will be surprised to learn DT had meetings this morning at theUniversity of Oregon Track & Field office. While Dave was in a nearby conference room, the staff gave me a tour of the newly-remodeled office suite. 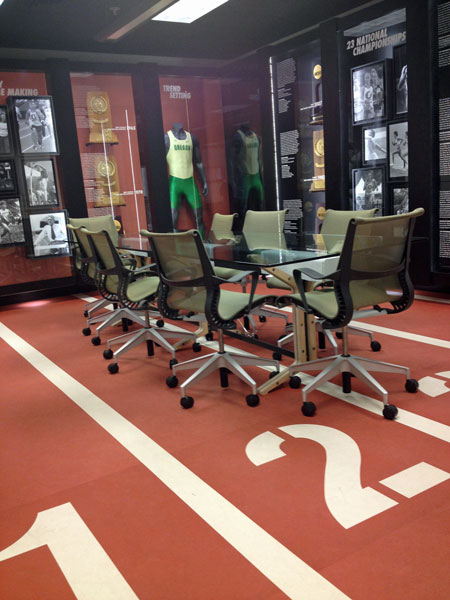 Track & Field offices - meeting room.
The table base is a steeplechase barrier. Clever!

While the Oregon football team gets all the (much-deserved) attention and makes all the money, they have yet to win a national title. Never. (Hopefully this fact will change next month.) Meantime, the track and cross country teams have now won 23 - TWENTY THREE - national championships. 23! There isn't a space on a wall without a trophy or award. (TRIVIA: only one other sport has won a national title for the Ducks - the 1939 men's basketball team.) 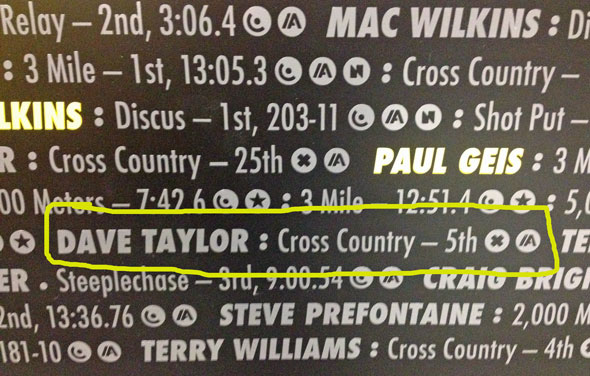 But if anyone is going to keep an eye on me, may as well be world-record-holding, Olympic Decathlon Gold Medalist, World Champion, Duck alum, Oregon native and the World's Greatest Athlete - Ashton Eaton.

Cummins phoned at noon to say our RV was ready to roll. They found no issues - just a normal servicing. We pointed the bus south on I-5, hoping to beat the wind storm. There was a very strong head wind, but My Driver handled the road with skill. 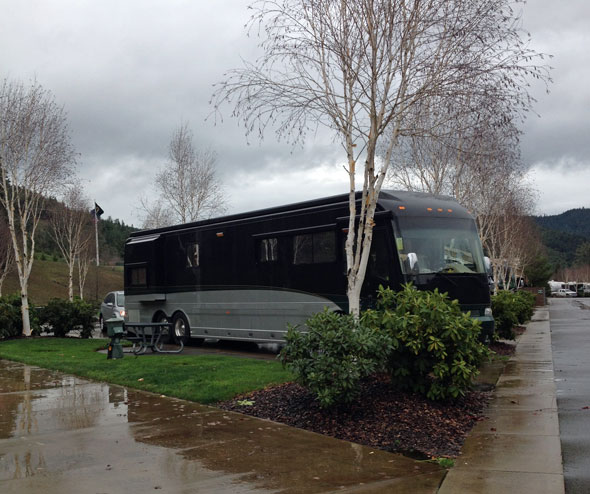 By the time we were an hour south of Eugene, the wind calmed and the rain seriously began to fall. We exited at our favorite over-night spot and called it a night. Friends in Portland are reporting terrible wind gusts and power is out across much of the downtown area. We really had luck with the wind today. Let's see how we do with the rain forecasted for northern California tomorrow.

A Chicken Alfredo Lasagna is in the oven. Marcus Mariota is winning all sorts of football awards on ESPN. It's going to be a good night.

Until my next update, I remain, your cozy correspondent.

You may also like:
We toured the new Duck football facility in June.

In 2011, we spent two nights at this resort and explored the area - fried chicken, a ghost town and a fun bakery.

RV PARK: Seven Feathers RV Park. We saw a billboard on the way here today advertising $19 campsites Monday-Thursday nights. We paid $19! Sweet deal for one of the nicest campgrounds in America.

« On the Road Again The Casino Trail »