Absinthe, at Caesar's Palace. This show is described as raunchy acrobatics. Tickets to the show were given away to a few lucky basketball fans.

Arizona won. UCLA won. They will face each other tomorrow evening.

We took a lunch break between games and enjoyed tacos at Javier's, an upscale Mexican restaurant in the Aria Hotel.

The Oregon State Beavers lost to USC in the first game, but the Oregon Ducks - again after trailing the entire game - beat Utah. Whew.

Bol Bol walking in front of the Shake Shack with friends

We also saw Bol Bol, the 7'-3" son of the NBA player, Manute Bol. Bol, who attends high school in Las Vegas, has signed to play at Oregon next year. He walked next to me and I did not come to his rib cage. Dude is tall. Actually, there are a ridiculous number of super tall men in town attending the tournament. I feel shorter than usual. 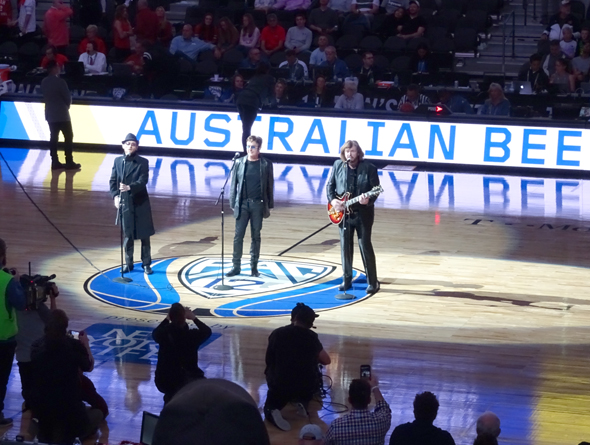 I've photographed this gorgeous metal sculpture before.
At night, she lights up and changes colors every few minutes. 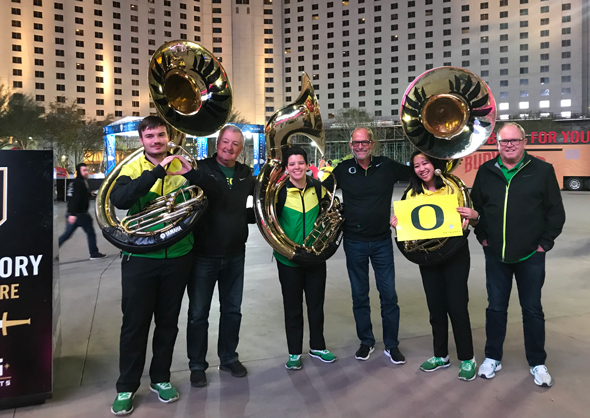 Dwayne, Dave and Steve pose with Oregon band members outside the stadium after the victory

After the game, we met more old friends and enjoyed maybe a few too many cocktails before calling it a night.

The Arizona v UCLA game is tomorrow at 6p pacific on the Pac-12 Network, followed by the Oregon v USC game at 8:30p pacific on Fox Sports 1.

Until my next update, I remain, your height-impaired correspondent.