A Morning in Ketchikan

Ketchikan, Alaska: The weather continues to be outstanding. In a city proclaiming to be the wettest city in America (200+ inches of rain per year), everyone was a little batty with the blissful sun.

Lisa and I planned all the excursions we decided to experience while on this vacation. For Ketchikan, we had chosen a bear-spotting boat trip that concluded on the beach for a bonfire and s'more making. Doesn't that sound just perfect for the grandkids? Unfortunately, yesterday we noticed an age restriction: attendees must be over 5 years old. Due to the fact the ship sold us these tickets knowing the ages of everyone in our group, they did refund our tickets, but now we were wondering what to do in Ketchikan from 8-12:30 with two energetic kids? The excursion desk suggested the Lumberjack Show. It is only one hour long, wasn't too far from the ship, and would be something entertaining and different for the kids. Leo had never heard of a lumberjack. Lucy was clueless.

The onboard photo staff offered photos with an orca as we left the ship. The kids were all about this... and we later learned, their father was as well: 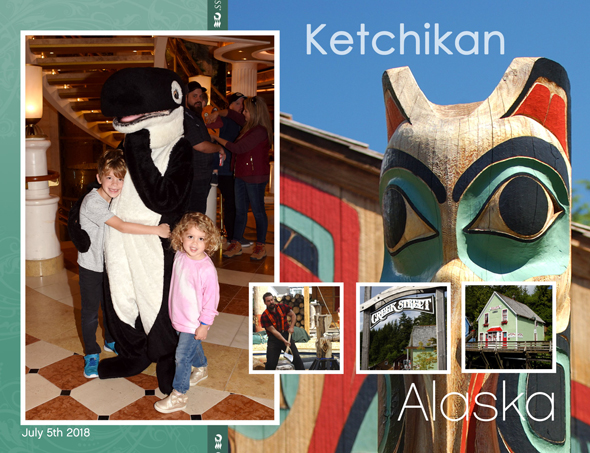 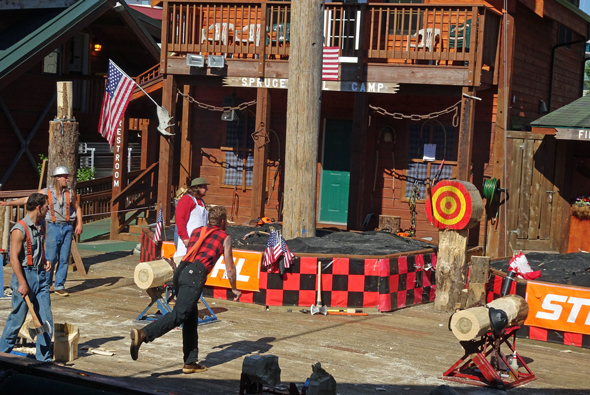 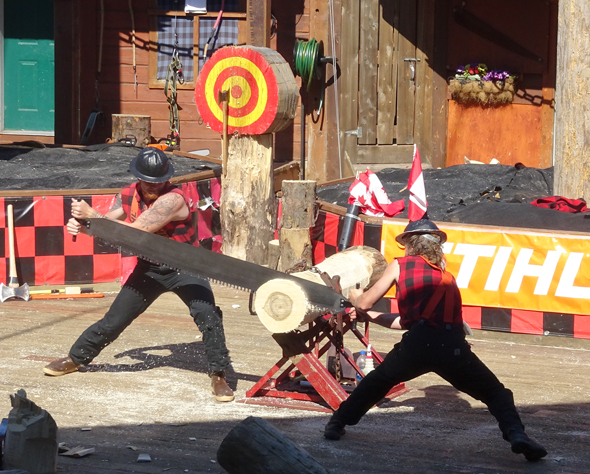 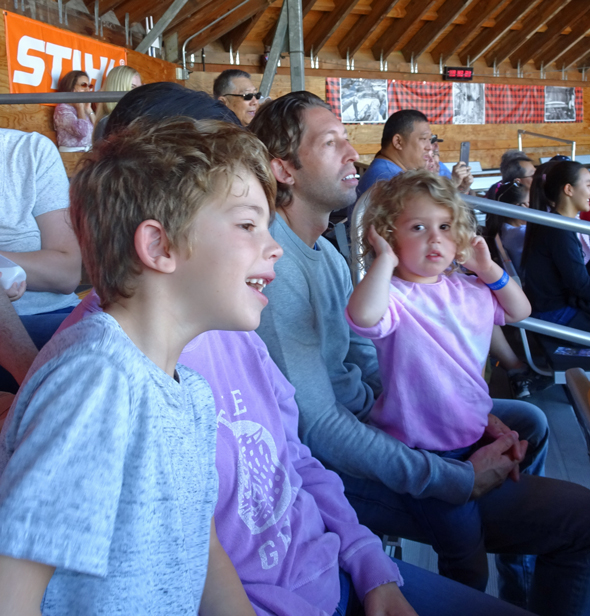 Lucy did not like the noise of the chain sawing competitions...
her brother however... 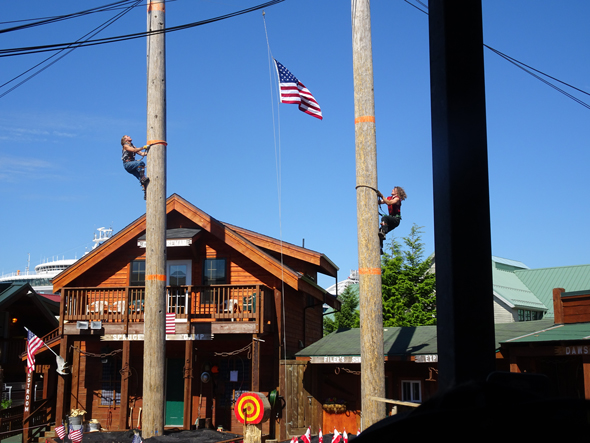 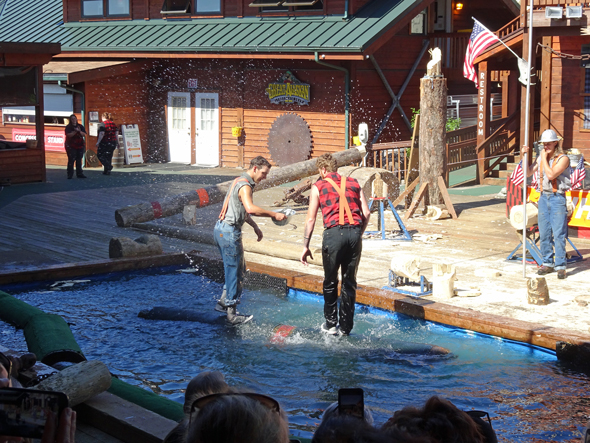 Log rolling: the competitors really splashed each other - on purpose

Well, that was really fun and the audience really participated. There was banter and joking by the host between each competition. Probably boring for the guys to tell the same bad jokes over and over every day, but we all laughed. There was a lot of up-sale for items in town to purchase, or items in their gift shop to buy as souvenirs... and a tip jar with the clever label of "lager fund" hanging from the door at the exit. Lenny and Lisa couldn't escape the gauntlet. Lucy now owns a sweet cuddly teddy bear that turns to a sharp-toothed chomping monster when his mouth is opened. Leo now has a toy wooden axe.

By the way: the Canadian team won this morning.

After the show, we took a stroll up to Creek Street, where all the shops are set up on raised walkways above a creek. 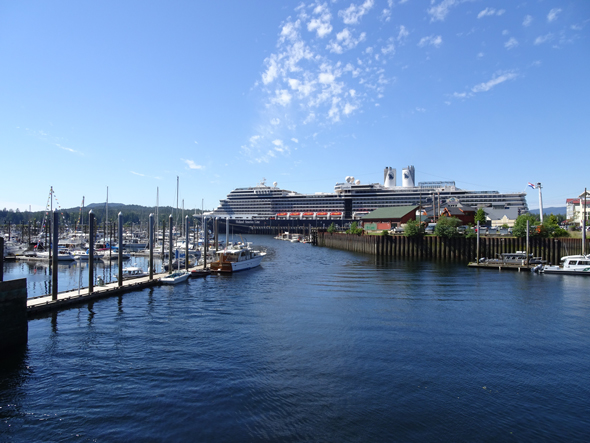 A Holland American Lines ship in port in Ketchikan

Lisa wanted crab legs, as she had missed out on crab legs due to Lucy's complete meltdown in Juneau a few days ago. We had cell service in Ketchikan (yeah!), so Lisa googled the best crab restaurant, and we ended up nearly next-door to the lumberjack show theater to the Crab Cracker Seafood Bar. 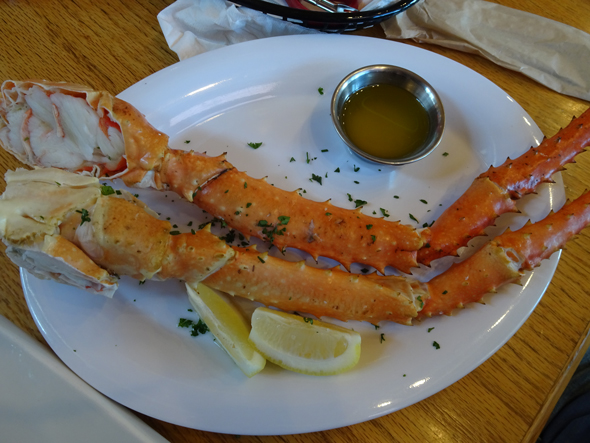 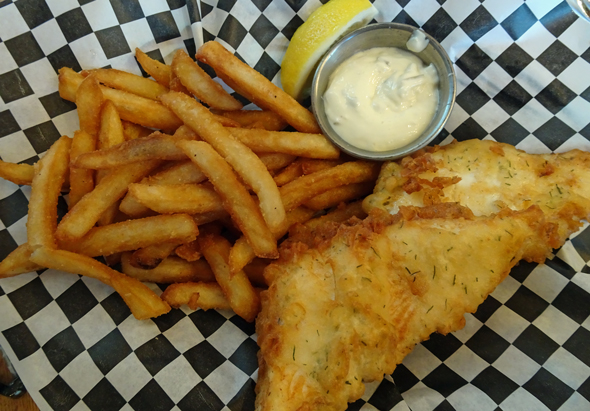 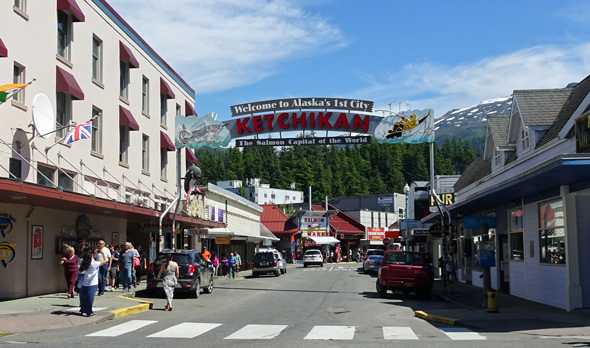 Ketchikan: Alaska's first city and salmon capital of the world

More posing - with a bear and with Bubba: 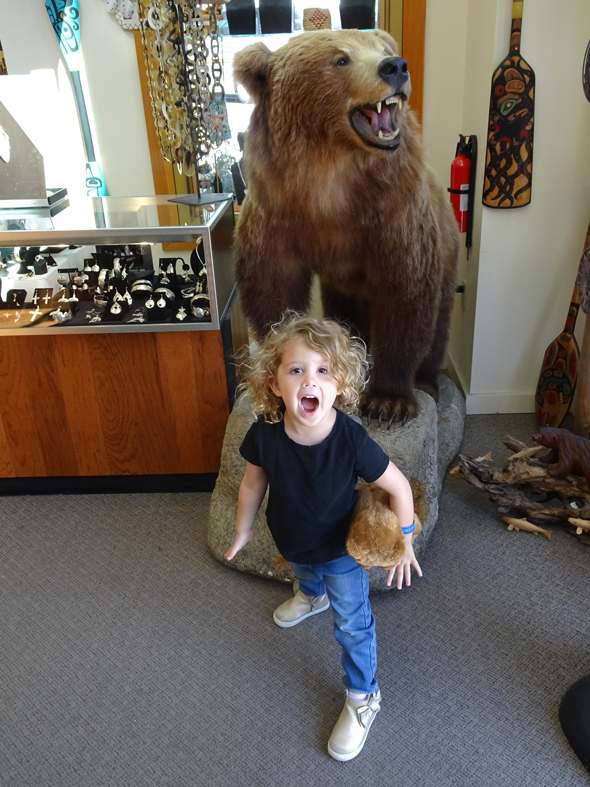 The view after leaving port

We returned to the ship and set-up camp on our adjoining balconies to watch the sail-away from Ketchikan. It was so warm and sunny. Hot, even. After leaving town, we would see miles and miles of tree-covered islands, before heading south along the Inside Passage. We left port at 1p. By two o'clock, it was too chilly and windy to be outside on the deck. By four it was raining. I won't complain. Such great weather for every excursion and port so far, with only one more to go - Victoria. Unfortunately, we will be in Victoria Friday night from 7-11p. Dave and I will remain on the ship with the grandkids, while their parents go to dinner in town... so I'm now weather-ambivalent.

We went to afternoon tea when the weather turned... you know, something to tide us over until we eat dinner. Leo thinks afternoon tea is the best thing ever. Uniformed servers, with gloved hands, presenting him with trays filled with savory finger sandwiches, pastries, scones, and other tempting treats - and Leo can ask for anything he wants! His comment: this must be heaven.

Then everyone had a little rest/nap before the evening entertainment. First we went again to the Wheelhouse Lounge for cocktails and dancing. Frosty was singing only Beatle songs tonight, and encouraged people to sing/clap along. As it was formal night, Lucy was wearing her favorite dress and I wanted to take a photo. Well, I tried... but her brother wanted in the photograph too. 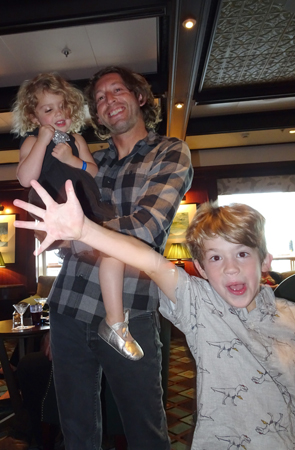 Anyway, we all looked gorgeous tonight. Maybe only one of us had a sparkly star dress with a voile skirt - and lamé slippers - but we were all gorgeous.

The kids were invited to a dance party in the nightclub, which included a dinner before. (Obviously the children are far more popular than the adults in this group.) After their dinner, the kids went up to the disco (situated hanging off the back of the ship on the 19th floor!) to dance for an hour. (The disco doesn't open until 10p for adults... so we have never been there.)

While Leo and Lucy were partying like rock stars, the adults dined at The Salty Dog, which offers only a dozen or so dishes, all served as appetizer portions. The food was very good and very different from usual cruise fare: tomato soup with grilled cheese (the soup was white and I still can't figure this one out), grilled holumi and asparagus, braised short rib poutine, lobster mac & cheese, mushroom salad... to name a few. Nothing healthy at all. 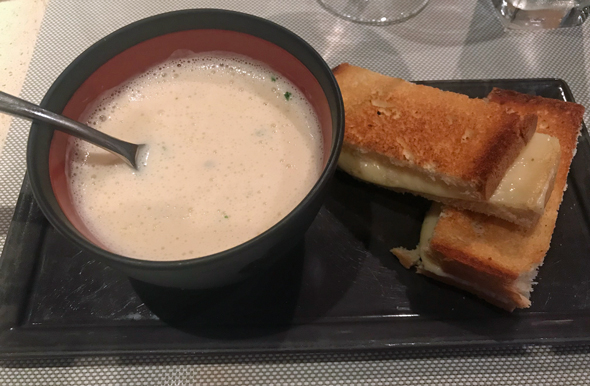 Grilled cheese & Tomato Soup. When I asked our server how/why the tomato soup was white, she kindly explained that it was pureed. Funny, in my kitchen, when I puree tomatoes, they remain red. Lisa thinks there must be one cherry tomato and a cup of cream in the recipe?
Either way, the soup was the best thing I tried tonight. 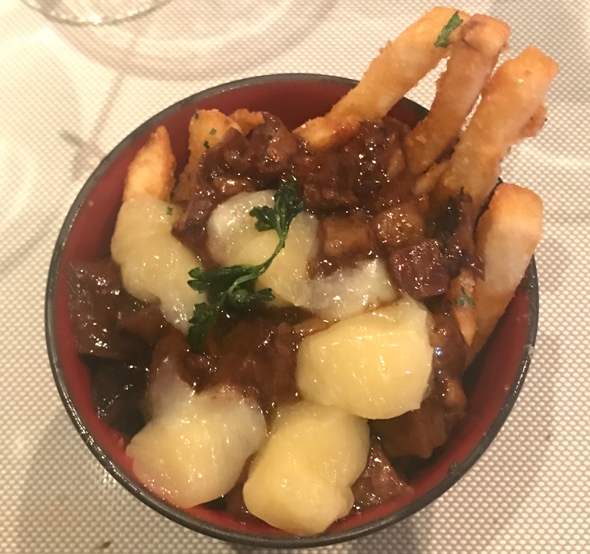 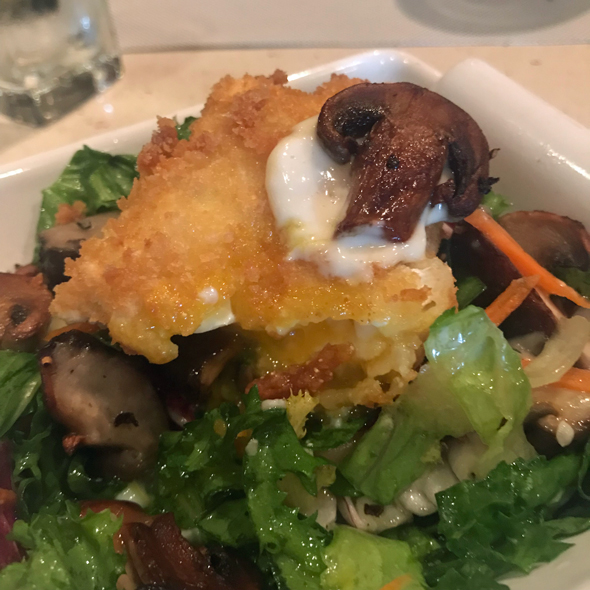 The dish winning the "killing with kindness" award. A lovely fresh salad (the only fresh item on the menu) loaded with marinated mushrooms. Then... wait for it... topped with a poached egg. Y'all know putting a poached egg on anything is a very hot trend in the current food world, so why not take a poached egg, coat it in batter and deep fry the mess? Crazy and Amazing at the same time.

After our calorie-fest we fetched the kids and called it a night. 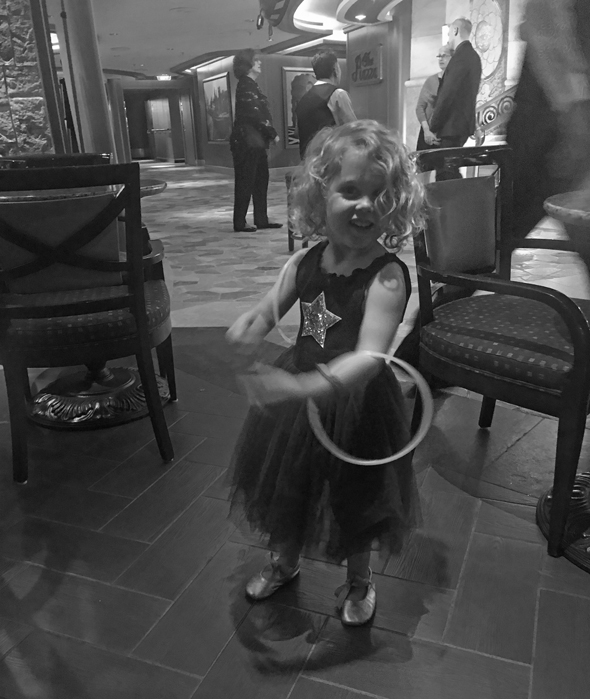 The Disco Princess returned with glow-sticks

Until my next update, I remain, your seaworthy correspondent.

Your May Also Like:
The Ruby Princess
About Ketchikan
Wildlife Safari & Beach Bonfire tour

« 4th of July in Glacier Bay On Our Way to Victoria »