A Fun Day At Sea

At Sea: The Ruby Princess sailed north along the western shore of Vancouver Island overnight. About midnight, the seas became fairly choppy and the winds were strong. I love this - just so it isn't dangerous to get about the ship - it's liked being rocked to sleep. Also (knock on wood), none of us suffer from seasickness.

When we woke, the skies were grey, but the waters had calmed a bit. We sat in the "living area" (a sofa and a chair) of our cabin, sipping coffee. I started singing a line from an ancient Jimmy Buffett song, A1A... there are whitecaps on the ocean, and I'm watching for water spouts... when we saw a large whale spouting! Like magic. Kismet. Karma. A bit later, several Dall's porpoise were seen. Up in the fitness center, DT reported seeing a whale tail and many water spouts.

The clocks were moved to Alaska time overnight, so we are now one hour behind the Pacific time zone, and will remain so for several days. The kids slept all night in the hide-a-bed in their parents room, and they slept for a long time and were quite cheerful when they came next-door to visit us this morning, still in their jammies - Leo rapping a song about his Dad going to the fitness center, and Lucy, with her crazy morning hair, smiling while performing a new stunt - falling backwards. Goodness - so much energy so early in the morning.

Since we are at sea all day (not visiting a port), Dave and I spent the morning exploring the ship. We think we have our lay-of-the-ship figured out a bit now. The Ruby Princess is simply massive. 19 floors! We found a few restaurants we had not seen before. Many new bars. Shops. A wine bar that (random?) has sushi. 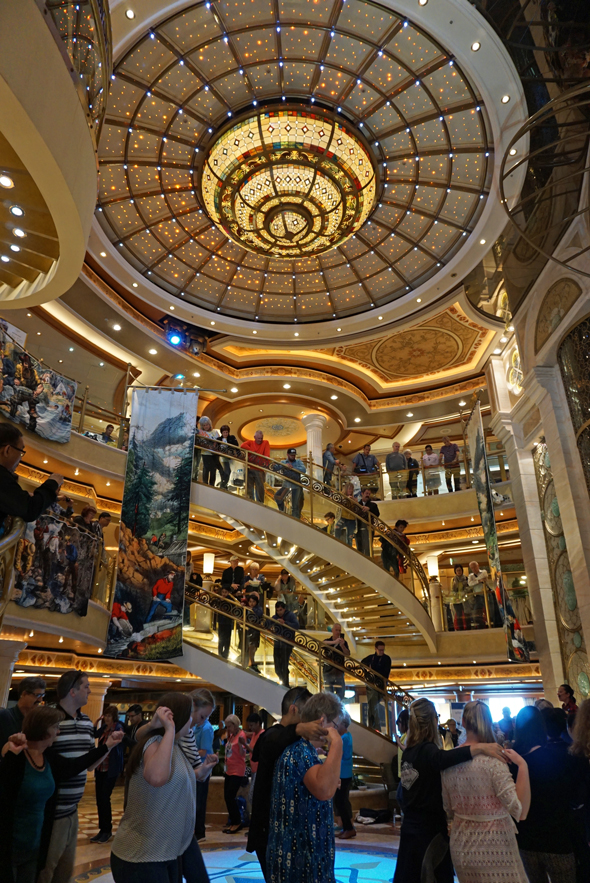 Today is Canada Day, celebrating all the provinces joining together to become one great country. Happy Canada Day to Our Northern Neighbors. The ship is decorated in many areas for the holiday: 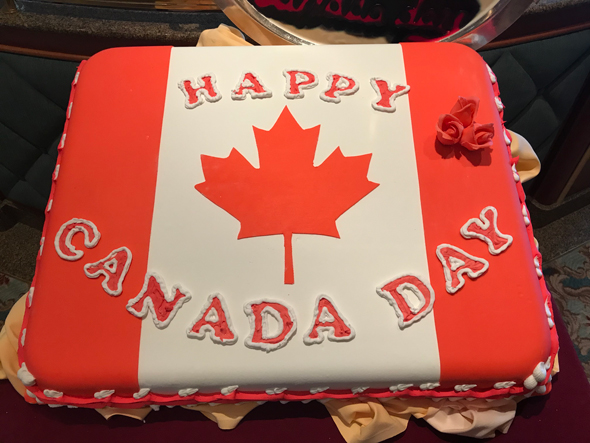 We didn't see our family until lunchtime. They were busy with activities in the Kid's Club - like a teen center, except for 3-7 year olds. Very supervised. Leo and Lucy arrived to the dining room with small stuffed sea turtles, painted turtles cut-outs glued to popsicle sticks, and hand puppets of lions. Not sea lions, just the regular African sort - all loot from their morning in the Kids Club. They loved it and have already made friends.

After lunch we went to the massive Princess Theater, spanning two decks (6&7) at the front of the ship. 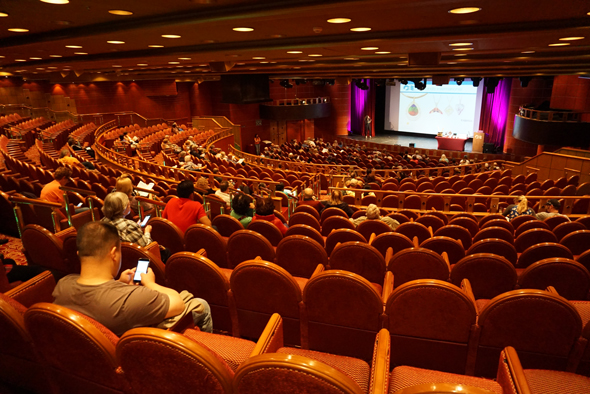 We listened to naturalist Michael Modzelewaski give a talk (every seat was full for this lecture) about his solitary life on an island in the inside passage, where he studies orcas. 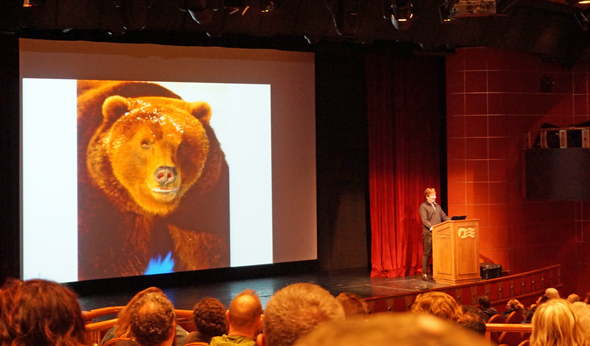 Tomorrow, Mr. Modzelewski will be sharing (if you tune your cabin television to channel 39 tomorrow morning between 6a & 8a) the location of whales spouting as we sail through a certain passage where whales are often seen. 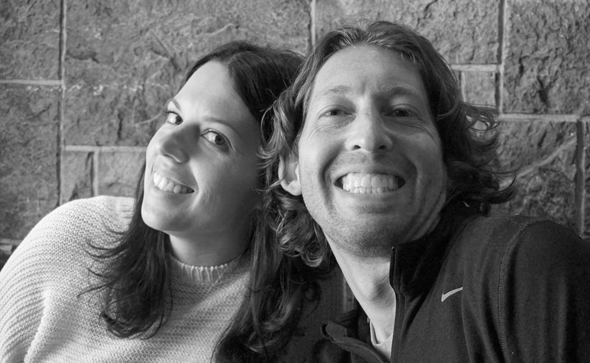 Later, we went to Afternoon Tea in the Da Vinci dining room and then everyone had a rest before readying ourselves for a "formal night" and a musical show in the Princess Theater.

All six of us went to the buffet and pizza joint so Lucy and Leo could eat before the show (adults did not eat). 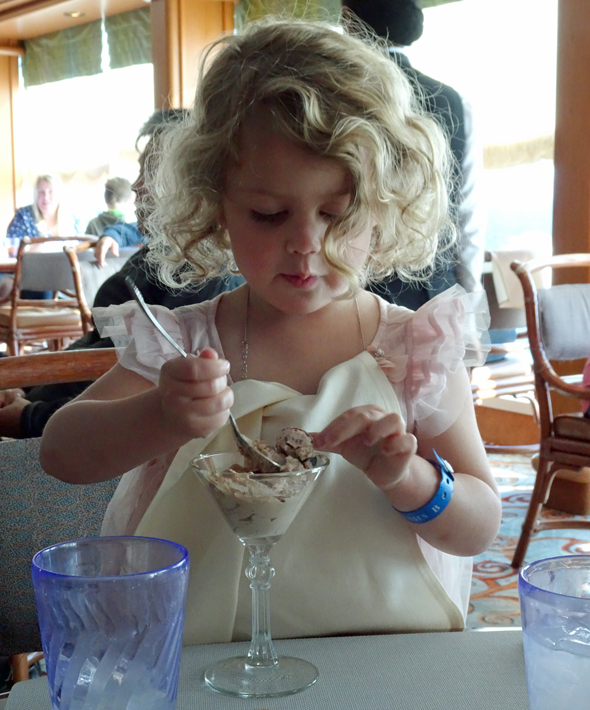 Lucy and Leo were dressed for formal night. They had pizza and fruit... and, okay, chocolate desserts, before we all went to the Princess Theater for a musical presentation celebrating the entire world coming together in peace and harmony in beautiful colors. Leo and Lucy were very excited for the show, because their "teacher" at the kid's club was in one of the dance numbers and they were so excited to watch her perform. 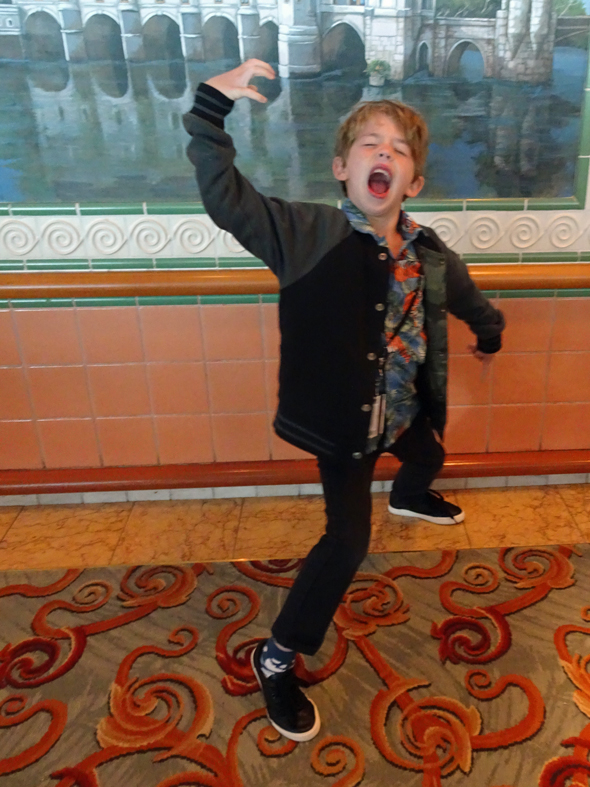 Leo posed for me on the way the theater. (Please make a note of Leo's teeth in this photo.) 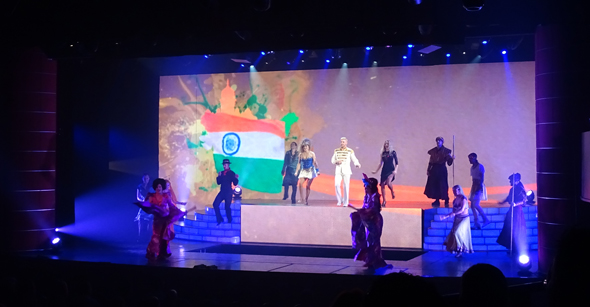 The show was very good and the kids especially enjoyed the music, singing, and searching the faces on stage for the young woman working in the childcare center. Costumes were amazing and we were treated to indoor pyrotechnics.

Leaving the theater, we passed through the atrium to witness the obligatory Captain's Welcome champagne fountain - the red spots are rose petals: 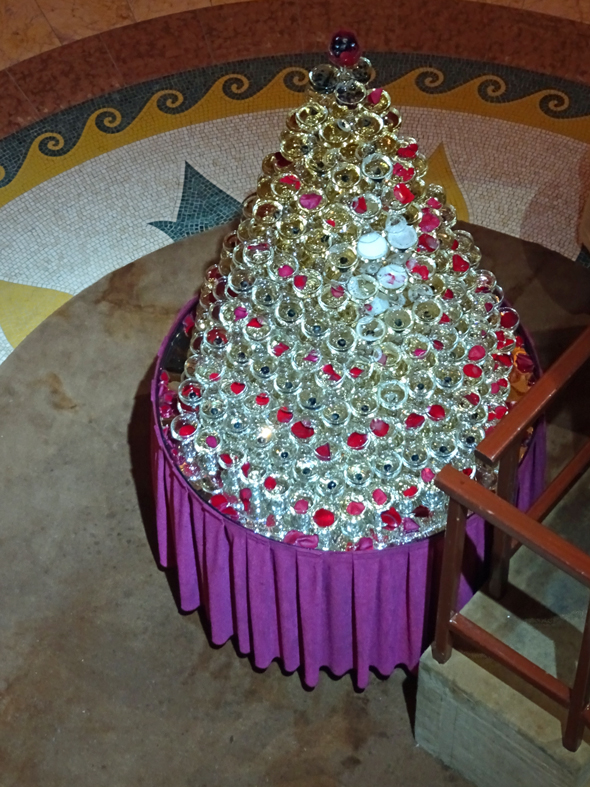 Then the grandkids changed to their pajamas and went to a pajama party while their parents and grandparents enjoyed a nice, long, leisurely grown-up meal consisting of several courses. One course was dessert. 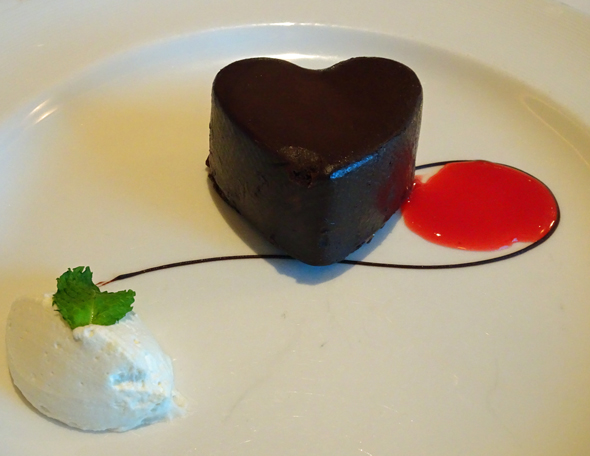 The is the signature dessert of the Princess Lines - the Love Boat. A dense rich chocolate mousse/cake coated in dark chocolate. It is small - five bites at most. I've never been able to finish this treat. So rich.

When we arrived to fetch the pajama-clad party animals, we were met with a big surprise. For days, one of Leo's top front teeth has been wiggly. The thing was hanging by a thread and he loved to gross us all out by moving the tooth to-and-fro. Tonight, the tooth fell out while he was at the Kid's Club. But, not only did the wiggler depart his gums, its companion fell out as well. The choppers were presented to Leo's shocked parents in a little zip-top bag. 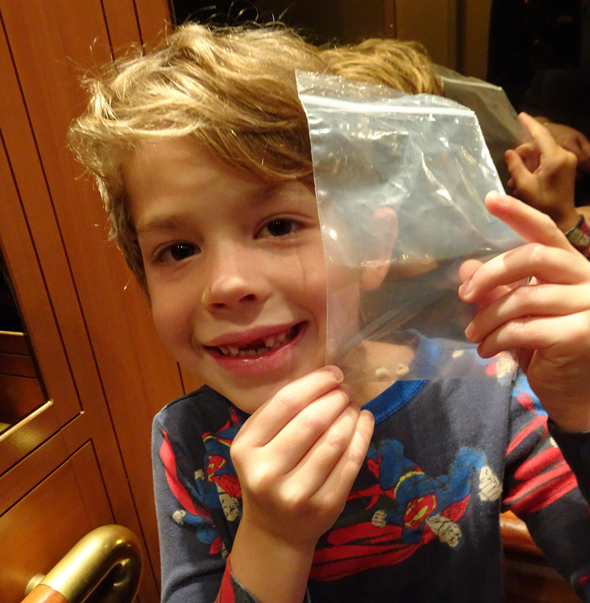 Why is he growing up so fast? His mom lost a tooth while we were on holiday in Australia, so I suppose it is fitting Leo should lose his under similar circumstance? 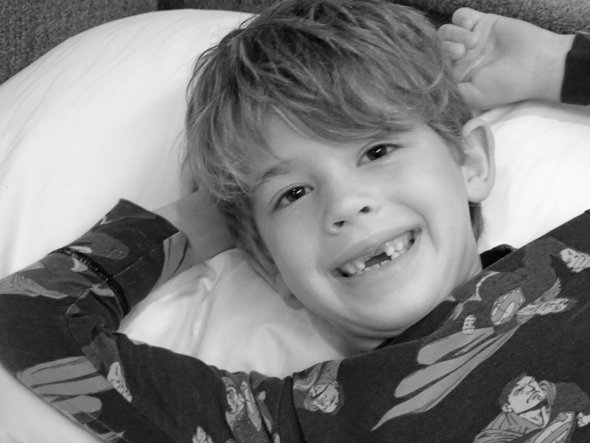 If the tooth fairy could find Lisa on a small cay on the Great Barrier Reef, certainly she can find Leo on a ship in the Pacific, eh?

Until my next update, I remain, your "scrounging for quarters" correspondent.