Los Angeles, California:  I promised photos of Leo today, and I will comply with my promise... however the photos are not quite what I had hoped. Today was a crazy madhouse of activity. Lisa is heavily involved with a school fundraiser/auction tomorrow. We are here to help with the kids/house while Lisa is occupied. She must have come/gone 10 times from the house today. We had Lisa's car (car seats!), and she had our car all day. Dave and I needed to fetch Lucy at 1p from her preschool and Leo at 3:35p from the library after school.

Packages and auction items were delivered all day. I am thinking Lenny had the right idea: it was easier to simply go to work than deal with the day-before auction chaos.

On one of her stops to the house this morning, Lisa had a call from Leo's school informing her Leo had taken a tumble in the playground and had done a face-plant into the gravel. They said the school nurse had treated his wounds and that Lisa could fetch him, but it wasn't necessary and he was fine. (I guess they are required to call?)

We continued with our planned schedule... which included the 11a televised Duck v Iona basketball game. Though I had to leave at 12:45 to retrieve Lucy from school, the Ducks were up by around 20 points at the time, so I felt safe slipping away for a few minutes. The final score was 93-77. The Ducks will now face the Rhode Island Rams on Sunday in Sacramento. This game will also be shown on TBS, at 4:10p pacific.

After the game, with Lucy in tow, Dave and I went to lunch. We wanted to go somewhere to get a bit of corned beef. It was St. Patrick's Day, after all... and Our Ducks had just defeated a school with an Irish-themed mascot. We tried a few deli's, but could not find a parking spot in the entire City of Los Angeles. We drove around for more than 30 minutes! Lucy was at-risk of falling asleep in her car seat (as two-year-old children tend to do mid-afternoon). Finally, starving, I demanded we find a parking spot and where ever that spot happened to be, we would eat at the closest restaurant. Deli be damned. I was at the point of thinking... what the heck, wasabi is green... let's have sushi for St. Patrick's Day.

We finally found a spot in front of a very nice Italian place we both really like, but had not visited for over a year. Basil is green! It was now 2p and the place was sparsely filled, so no one minded a two-year-old guest. Lucy asked for a high chair (she no longer needs a high chair) and sparkling water. Little Princess knows what she wants. (I think possibly the restaurant had to go to another nearby restaurant to borrow a high chair?) Lucy just shared our meals - Caprese salad and simple lunch-sized vegetarian pastas. She ate well, was perfectly behaved and quiet. Lucy charmed our server. We asked if she would like some dessert. She asked for ice cream. The restaurant did not offer ice cream. Nor gelato. (I thought this a bit strange for an upscale Italian restaurant to not offer gelato.) We told Lucy they did not have ice cream, but ordered a ricotta cheesecake to share. When the waiter left the table, our confused Lucy asked why they didn't have ice cream. Did someone eat it all? We tried to explain they never have ice cream, but Lucy was having none of this. Obviously someone had eaten all the ice cream in the restaurant. Oh, the mind of a two-year-old.

Lucy loved the cake, and especially the mound of whipped cream on top.

Later, Dave brought home a tattered Leo. His temple was a bit shredded, his elbow was bandaged (so we have no idea what hides there) and his palms have seen better days. 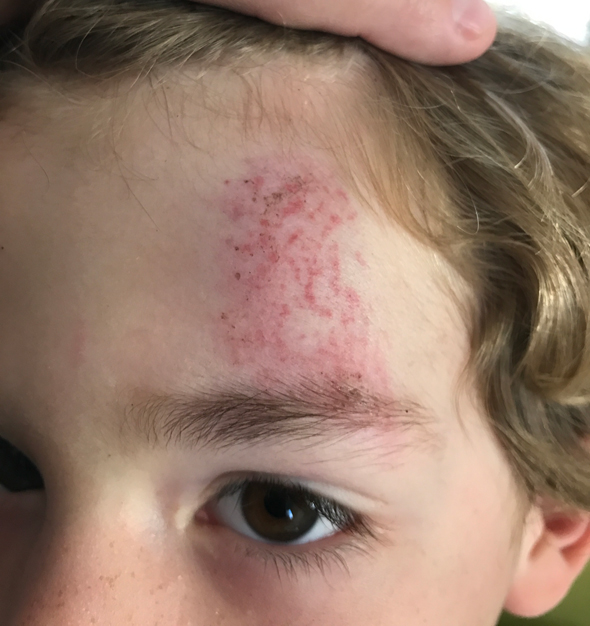 This had to hurt! What a brave boy. There is a nasty lump under it as well. Though it looks gnarly, I bet Leo will heal quickly and be presentable before his senior prom. 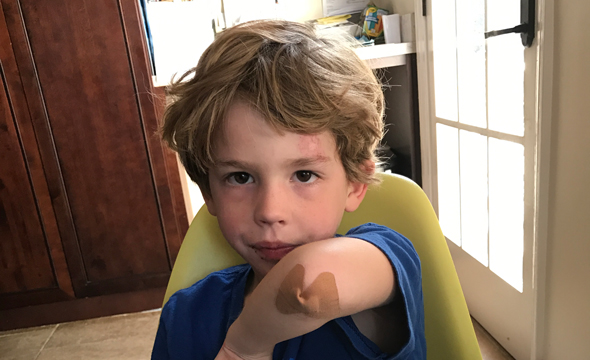 So, not the adorable photos I was planning to post of Leo, but the Brave Little Kindergartener is still pretty adorable to us.

And clever. And curious. And an artist.

Several times a day, I check the live video feed from the perpetually pregnant giraffe in New York. Will April ever have that baby? I showed Leo the feed this afternoon and told him all about how giraffes are born. The most interesting thing about a giraffe in labor is that a giraffe will never let you know she is labor. A giraffe in obvious labor on a plain in Africa is like inviting every predator within miles to a free buffet. No way. Female giraffes hide the signs. They get the baby out quietly and quickly. The babies emerge like a diver - head and front feet first - then drop (around six feet!) to the ground from their mom's backside. Plop. A few minutes later, the calf can stand... because they need to get the heck out there... or become the main course for a lion family gathering. Giraffe infants are around 6 feet tall and weigh about 150 pounds.

Leo was fascinated with April. He began to draw the giraffe and follow her every move. The zookeepers visited April, gave her a quick exam and fed her a head of romaine lettuce - her favorite. Leo and Lucy enjoyed the lettuce feeding. 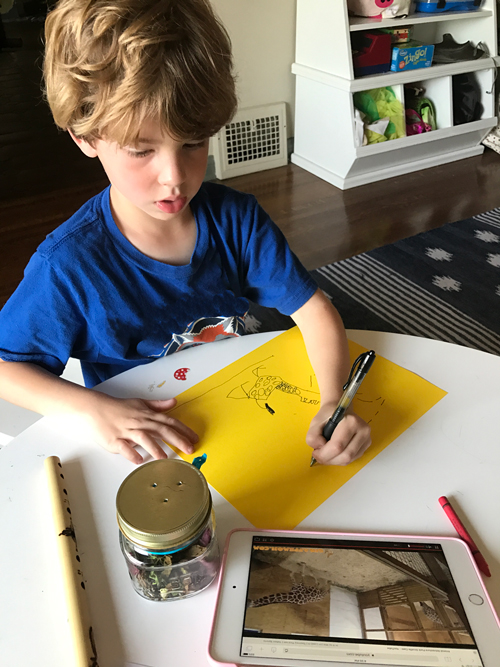 Leo, watching April on my iPad

And, yes, that is jar full of bugs and slugs and grass and leaves and sticks from the garden. Don't ask.

Piano and ballet in the morning.

« Afternoon with Lucy Gitty Up + Glamor »