Los Angeles, California:  Lisa and Lenny fell a bit ill on their trip and had to delay their return 24 hours - actually on my suggestion. While it is awful to be sick, at least they had a beautiful tropical beach view to enjoy - and they knew we would rally to accommodate their bad fortune. Lisa's friends offered to take the kids, but we know kids operate best on a schedule in their own surroundings, so decided to just keep-on-keeping-on until Lisa and Lenny returned.

Monday was another busy day. Leo had an afterschool activity at the library, then T-ball practice. Bubba handled the T-ball practice, while I stayed home (in the air conditioning) with Lucy. The weather was so hot for outdoor activity - 96 degrees - but Leo loved his practice and Dave kept Leo hydrated.

While Leo was at the library, Dave and I took Lucy to Magpie's Softserve after school. 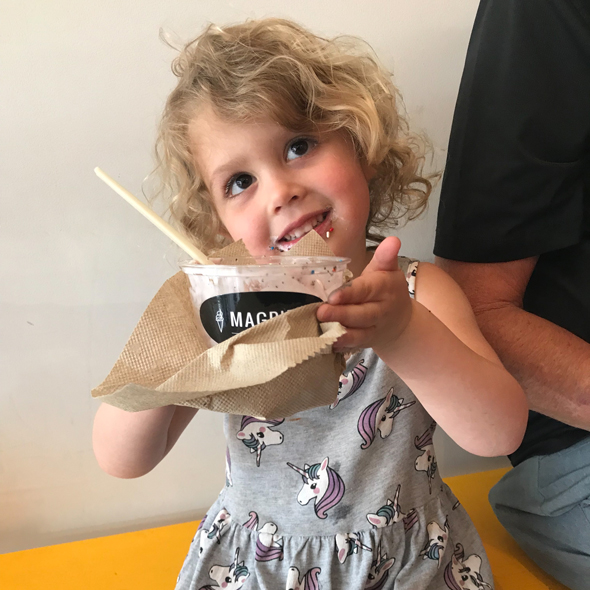 Instagramable. She is also sweet except when she isn't and thought to ask if we could bring ice cream home for her brudder. We did. For dinner Monday, I bought a Pillsbury roll-out pizza crust. Ya'know, the one that pops-out of a tube? Yes. Me. It is not organic in any way, but Day 6 of the Hostage Crisis warranted a few cut corners. We rolled the dough flat into a large rectangle, spread on a thin brushing of pizza sauce, added minced green peppers, black olives and mushrooms (Leo's choice), topped it with a little shredded (yes, from a bag!) mozzarella. Then I carefully rolled it up, jelly-roll style, sliced it into rounds and baked the swirls until they were golden brown and bubbly. (This recipe is similar to my popular Green Chile and Jalapeno Pizza Rollup recipe.) Lucy and Leo loved 'em! The only work was chopping the few veggies. Everyone survived! The few leftover rollups went into their lunchboxes today. Win-Win. Life isn't all about pizza dough in a can. While the kids are in school, Dave and I have been enjoying some of our favorite LA dining spots for lunch: The Village Bakery and Cafe, Fred62, Homestate and, today, Dune - know for the best falafel and hummus in Los Angeles: 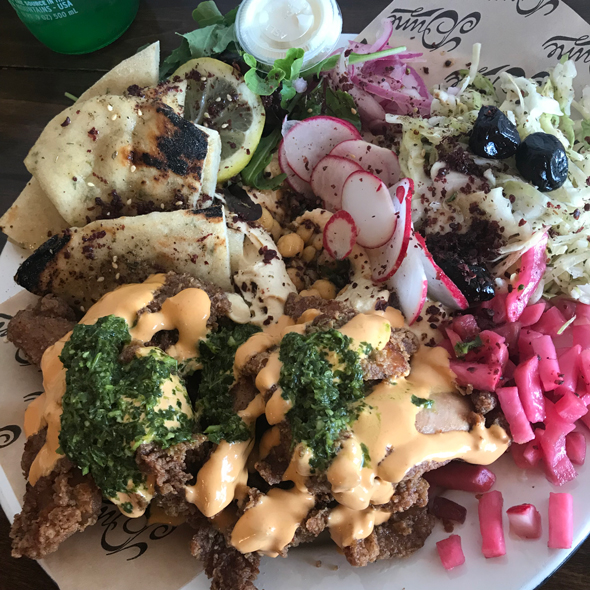 Except one of the cans was not chunks. I mistakenly picked up a can of pineapple rings. The kids thought pineapple rings were the coolest thing EVER, so I topped each ring with a strawberry and called it "salad" for dinner. Later, when Lenny and Lisa finally arrived home from their vacation (all recovered now), Lucy told her mom that I had served a salad, but there wasn't any lettuce. Silly Bubbe.

Silly Bubbe and Her Driver left for Indio about ten minutes after Lisa and Lenny returned.

Until my next update, I remain, your "Mary Poppins is an amateur" correspondent.

« A Day at the Zoo Coachella Pre-Function »