Los Angeles, California: Lisa and Lenny went off for the weekend to attend a wedding. Bubba and I were left to attend and spoil our grandchildren as much as possible in 48 hours... so, we are going to try to pretend yesterday did not happen. Lucy, though feeling better, was quite clingy and needed several diaper changes that required several baths.

There was a lot of this going on: 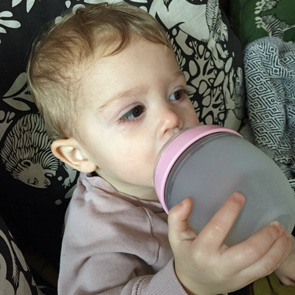 Due to her virus, dairy is not allowed, so Lucy is taking water mixed with Pedialyte. Due to Lucy being Lucy, the greatest joy in her life is food. (She is, after all, my granddaughter.) Poor thing is only allowed the most dull of foods. Mostly white foods. Pasta. Rice. Tortillas. Bagels. This diet was okay, until she saw Leo chomping down on strawberries.

Not. A. Pretty. Picture.

Lucy wanted to be held most of the day Saturday, and Lucy is usually much-too-busy to be on a lap for long. Bubba and Leo spent the afternoon in a movie theater seeing The Last Dinosaur. Leo liked the film, but his grandpa did not.

Today was A New Day! Little Lucy slept twelve hours overnight and was ready to hit the ground running on our planned Sunday adventure. She had toast and finally two precious strawberries.

And by precious, I do not mean that Lucy coveted the fruit. I mean her grandfather paid $10 for the organic basket at the local gourmet grocer.

Dave vaguely remembers visiting the La Brea Tar Pits as a small child. The bubbling sludge was not yet, at the time (early 1960's?), a museum. It was just another interesting thing to see in Los Angeles on vacation. 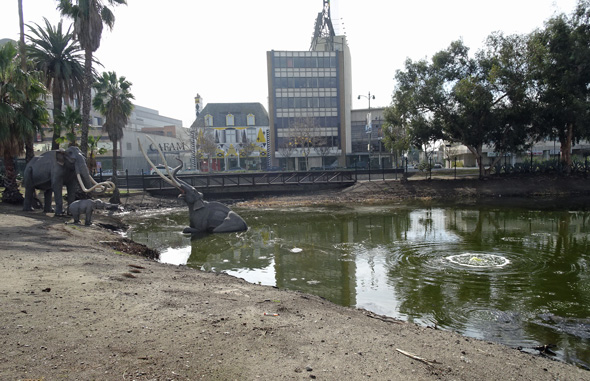 The La Brea Tar Pits are downtown Los Angeles. Downtown. In the middle of everything. Banks. Museums. Restaurants. Hotels. Bubbling pools of asphalt rose to the surface and surprised all sorts of post-ice-age creatures when they ventured into the sticky pools. Scientists have recovered countless skeletons of animals from the gooey depths.

It is free to walk the grounds and see the still-bubbling pots of tar. If you want to see skeletons of the massive antique mammals discovered in the tar pits, buy a ticket to the museum. 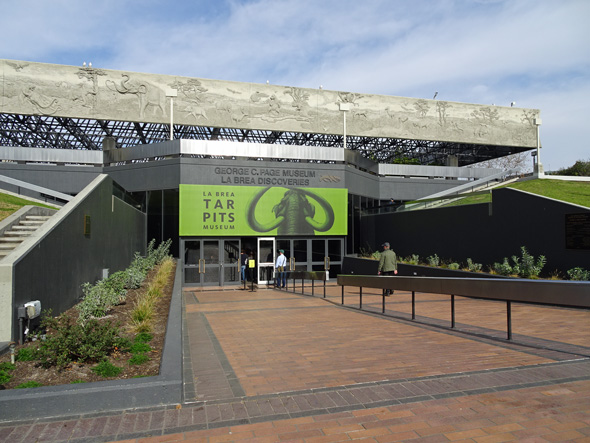 I am not a professional photographer or scientist. I am only married to a scientist. I was snapping photos and keeping my eyes on two kids while trying to read signs to grasp fascinating exhibits of now-extinct tar-encrusted animal skeletons.

Forgive my photos, but trust that we want to return again to read every sign at each display to learn more from this interesting museum. 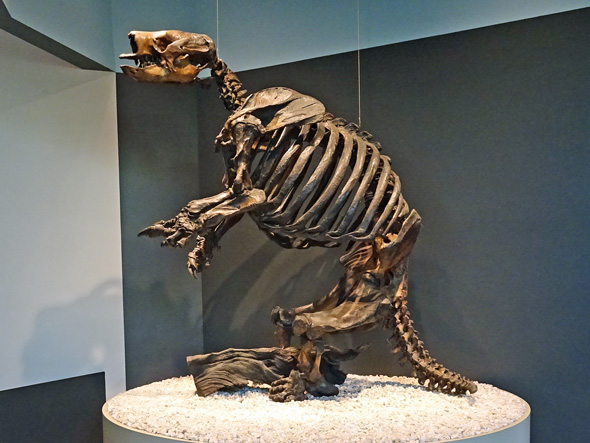 Harlan's Ground Sloth (glossotherium harlani) roamed all over North America and Central America (back in the day). This 1500-pound vegetarian was over six feet tall. 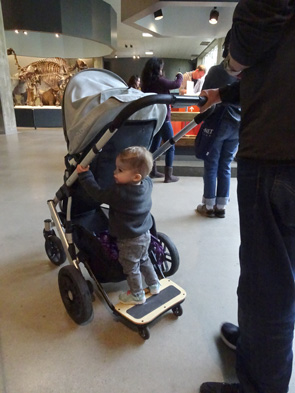 This homo sapiens is 29 inches tall and weighs 18 pounds. Just a wee-bit under normal, but she makes-up in charm what she lacks in digits. 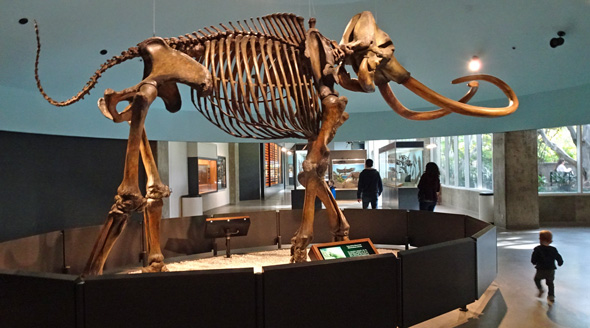 Mastodon (with Lucy, on the right) 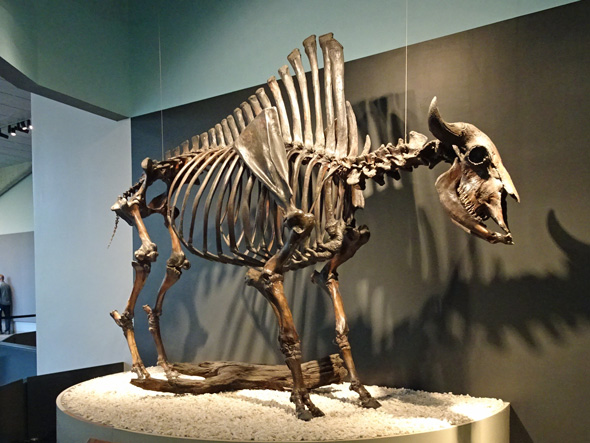 Above is an "antique bison" and is closely related to the same beast we see in Yellowstone. 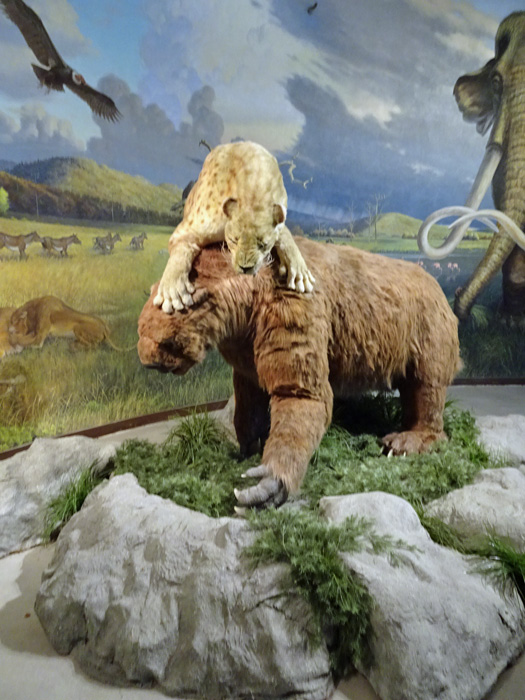 The museum has an animated display with a saber tooth tiger attacking a giant sloth. There is quite a bit of tossing, turning, growling and snarling. I suppose it was all to show the sloth was going to be dinner for the tiger? 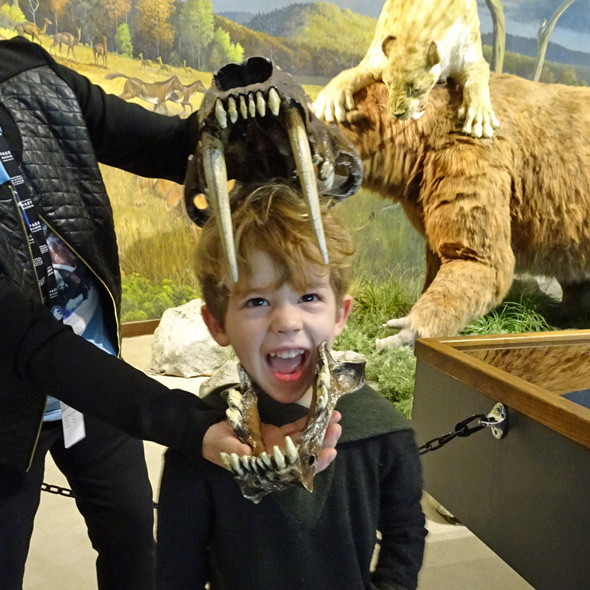 A friendly volunteer displays what it would look like (in the unlikely event) your grandson's head would be in the clutch of a saber tooth tiger. 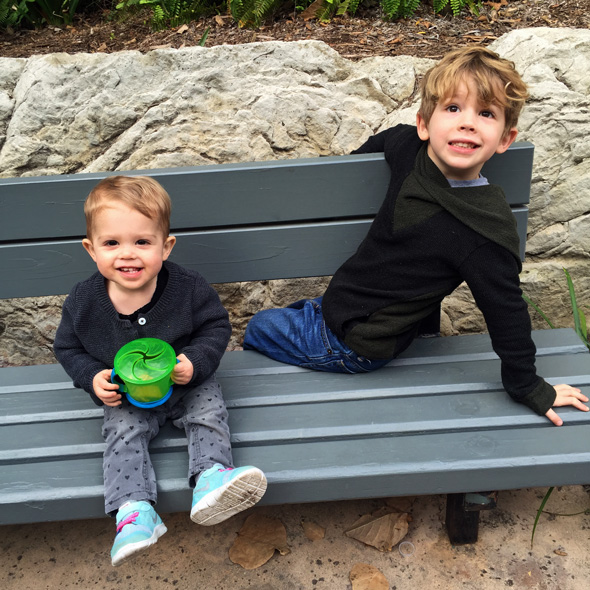 And this is what happens if the parents request (from a wedding party!) photographic proof that their children are still thriving in the care of grandparents.

Lucy has been trying so hard to say Bubbe, but keeps coming up with "Bee-Bye", which is not even close. Tonight she finally said Bubbe!

I put Leo to bed last night. After reading a few books and discussing the important issues of the day, Leo declared the obvious: You know, Bubbe, by the time Lucy is all growed up, you will have all white hair.

Until my next update, I remain, your greying correspondent.

NOTE TO READERS: Have your visited the tar pits? Did you visit as a child? Tell us your experience in the comment section below.